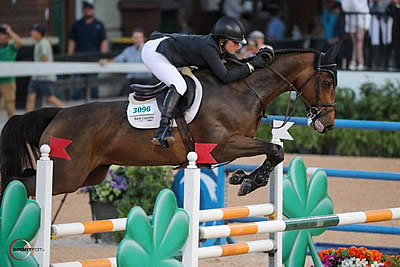 The course, designed by Guilherme Jorge (BRA), challenged 41 pairs, with five returning to pilot the short course. Jorge was the architect of the show jumping course for the 2016 Olympic Games in Rio and will design for this summer’s 2019 Pan American Games held in Lima, Peru from July 26 to August 11.

Shulman and the 2009 Selle Francais mare (Diamant de Semilly x Unknown) owned by Jill Shulman conquered a course that “was made for her,” Shulman said. “When I walked the course, I immediately thought, ‘Okay, this course is made for Villamoura.’ Anywhere I needed to add [a stride] it was available to me, because she’s a small horse, so I was super excited to jump her tonight. And I loved the jump-off course.

“She is amazing. She’s everything you could want in a horse: she’s light, hot, careful, and brave. Once she starts, you don’t have much of an option to stop. Her normal pace is very fast, so I always think stay calm and steady for the jump-off, not too fast,” Shulman shared after laying down an early clear round that ended up more than four seconds faster than the rest of the field.

Shulman revealed that the win was especially meaningful because it was her first FEI win as a rider representing Israel: “To hear the Hatikvah play was just super meaningful to me,” said Shulman. “My family has always been super connected to Israel and I’ve been wanting to do this for a very long time, and was waiting for the right time. Last fall I went with my dad to Israel and made Aliyah, and it was super exciting. I’ve been waiting for this moment to hear the Hatikvah play.”

Shulman continued, “I’m just working on building my string up to help support the Israeli team, which will continue to thrive. So I think the next few years will be a huge stepping stone for Israel, and I’m really looking forward to being a part of it.”

“I want to thank my mom, Jill Shulman, and John Roche, who is very influential in tonight’s win. He spends a lot of time with Villamoura and he said to me this morning, ‘If you get it right, she could win.’ So I’m glad it turned out that way!” Shulman concluded.