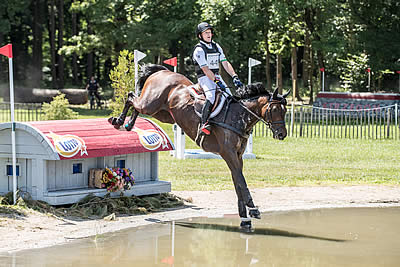 German riders have outclassed their rivals in the third leg of the FEI Nations Cup in eventing, winning both as a team and individually. Second place went to Great Britain, and third to the Netherlands.

Team Germany has taken the lead after dressage and kept it until the very end. The best score belonged to Michael Jung, who won the class individually with fischerChipmunk FRH. Second place after dressage and a great cross-country, going slightly over the time, and then a clear round in the showjumping granted him the first place in the class. “I’m very happy about my ride. fischerChipmunk is a great horse. The weather was not the best, but he was very concentrated and super to ride as always.”

Ben Hobday (GBR) has jumped into the second position with Shadow Man after a clear showjumping test. Andreas Dibowski (GER) has finished third. The leader after dressage, Tim Lips (NED), was 6 seconds over the time in the cross-country, and one knockdown in the showjumping cost him the podium.

Polish riders, after an unfortunate dressage, have jumped up into the 5th place and kept it until the end. The best athlete of the team was Jan Kamiński riding the Polish-bred Senior. Three knockdowns in the jumping placed him at the 25th position in the class, with 55 riders overall.

Eight teams competed in the Nations Cup class. For a lot of them, the stakes were really high. A good position in the whole classification is a chance for a ticket to the 2020 Olympic Games in Tokyo, for those who haven’t qualified yet.

Sunday’s showjumping determined the winners of the long format classes. In the CCI4*-L, the most difficult one during the show, the best was Yoshiaki Oiwa (JPN) with Bart L JRA. After a great clear cross-country, he took the lead, and he could even afford to be a bit over the time in the showjumping. “The weather is a bit hot this week, and my horse for sure is tired, but he jumped really well. We only had time penalties, but I am very very happy with him.”

Brigitte Peterhans (SUI) was the best in the CCI3*-L, and the “two star long” win went to Karin Donckers (BEL) with Ludique du Cœur des Collines.

Sunday was also the day of cross-country trials for the short format and national classes.

The winners of the international classes are as follows:

Winners of the national classes:

12 national and international classes were played out during the 4 days of LOTTO Strzegom Horse Trials. Riders from 22 countries competed with over 400 horses