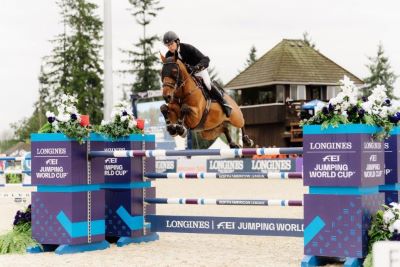 A compact but competitive field took on Peter Holmes’ (CAN) 1.60m track with the aim of getting an early jump on points toward qualifying for next April’s Longines FEI Jumping World Cup™ Final in Leipzig (GER). A total of 14 athletes from the NAL will punch their tickets to the Final, including seven east coast U.S. athletes, three west coast U.S. athletes, and two athletes apiece from Canada and Mexico.

A clear round did not materialise until more than halfway through the starting order, when world number 13, Kent Farrington (USA), executed Holmes’ test with ease. Three riders would join the former world number 1 for the shortened track. Farrington blazed the trail in the jump-off with a blisteringly quick round, but a rail at the final fence left the door open for another to overtake him.

Swail then put his focus on keeping the fences up, and he accomplished that mission despite losing a stirrup during the round. He crossed the timers in 38.98 seconds, and the remaining riders could not catch him. Swail’s student Vanessa Mannix (CAN) and Catinka came closest, finishing second as the only other double-clear performers (40.59 seconds), while Farrington ultimately settled for third (4/36.12).

“If Kent had been clear, I imagine he would have been the winner. He would have been hard to chase,” Swail said. “I did a little bit, after Kent, [because] he was very aggressive and so fast, thought that if I just dialed it back a notch, it would hopefully still be enough to get a win.”

Swail has been partnered with the 12-year-old “Vinny” for less than a year, but the barefoot bay gelding has quickly proven his merit. His World Cup win marked the fourth international grand prix victory for the pair since June 20. The duo also won the $75,000 CSI4*-W tbird Cup at the venue three days prior.

“I’m extremely proud [of my horse],” Swail said. “He’s had a wonderful week: He’s been first, second, and first. He jumped so well today, he deserved it for being so good.

“We’re off to a great start [in the North American League],” he added. “This is the first [qualifier]. We’re going to Sacramento and Las Vegas; we’re going to be on a little tour doing [World Cup events]. We’ll see how we’re going after that.”