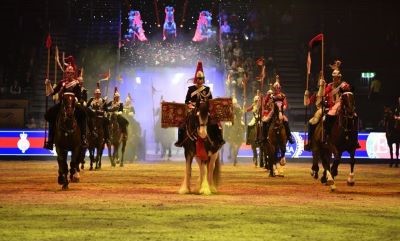 The London International Horse Show, taking place at ExCeL London from 16-20 December 2021, will host performances from the Musical Ride of the Household Cavalry Mounted Regiment as part of the spectacular schedule of equestrian action across the five-day Show.

Organisers have confirmed the attendance of the much-loved Musical Ride of the Household Cavalry Mounted Regiment, made up of 28 horses and 36 personnel, adding to the diverse range of equestrian activity already planned. As the only mounted ceremonial soldiers who also serve as fighting soldiers, the Musical Ride of The Household Cavalry Mounted Regiment is unique globally as it demonstrates exceptional horsemanship and the very best of British tradition. The drills, which are based on movements mounted soldiers would have historically used in battle, will be carried out to music and performed in a routine that is strongly focused on precise timing and coordination.

The Musical Ride of the Household Cavalry will join the roster for each performance, which also includes scintillating action from The Shetland Pony Grand National and The Kennel Club Dog Agility.

In addition to the breath-taking display acts, spectators will be treated to world-class competitive action, including FEI World Cup competitions in three disciplines: Dressage, Driving, and Show Jumping. The traditional crowd favourites, The Puissance and The London International Horse Show Grand Prix, will also take their place at ExCeL London, featuring the world’s best show jumping horse and rider combinations, with the next generation of riders set to star in The Mini Stakes and The U25 British Championship.

Show Director Simon Brooks‐Ward said: “We are delighted to be welcoming The Musical Ride of the Household Cavalry to The London International Horse Show 2021. They are always a firm favourite amongst the crowd, and we can’t wait to see what they have in store this year.”

Captain William Long of The Life Guards said: “The Household Cavalry Mounted Regiment is thrilled to be returning to the London International Horse Show. It will be very exciting to perform at the Show’s new venue, the ExCeL, this year.  It is always a privilege to take part in the show and truly does signal the start of the festive period.”