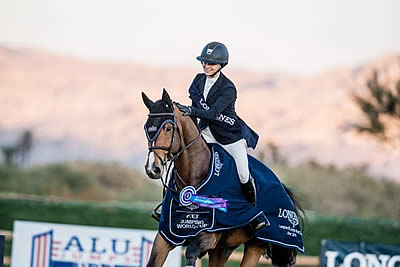 Adrienne Sternlicht (USA) had only jumped Bennys Legacy at three events before heading to the west coast for World Cup competition, but the pair proved their partnership is already strong with a statement-making victory in the $100,000 Longines FEI Jumping World Cup™ Thermal (USA).

Last to go in a five-horse jump-off, Sternlicht and the 11-year-old Oldenburg gelding jumped right to the top of the podium, crossing the timers of Alan Wade’s (IRL) shortened course in 39.56 seconds. Keri Potter (USA) and Ariell la Sirene finished second with a 40.89-second time, while Adam Prudent (USA) and Baloutine, the only other double-clear performers on the day, finished third. Their time was 41.83 seconds.

“It’s my third show with him and my third jump-off. I thought that this jump-off played to his strengths. He’s not a horse that’s particularly used to going fast, as he’s incredibly careful. I just tried to ride a smooth round and take advantage of his stride, take time where I needed, and challenge him in a few places.” — Adrienne Sternlicht (USA)

Bennys Legacy has been in Sternlicht’s string since the summer, and the gelding’s victory held special meaning given its timing.

“He’s named after an Irish boy that bought him as a foal. He passed and they named the horse after him,” she explained. “It’s a really special story. My groom and manager Emma Chapman was there with him the night before he died. For her, when I got the horse, it was a bit emotional. Thursday was the anniversary of his death. Those that knew Benny say the horse reminds them a lot of him. The horse knows that he has something special.”

Sternlicht was making her first trip to Thermal, traveling with Chapman while her trainer, McLain Ward (USA), was competing in Toronto (CAN) on a double-header weekend of North American League action. She sealed her win by leaving out strides in the first and final lines of the jump-off.

“It gives me a lot of confidence to prepare on my own,” Sternlicht said. “The two grooms I have here know me and my horses inside and out, and I know I can always call on them. As a rider, I’ve learned a lot from these experiences of being on my own. [Ward] called me after the first few went and asked if I had any questions. He tries to watch as much as he can, and I watch him. It’s a real team effort the way we do the sport.”

Following her win, Sternlicht moved into third place in the east coast sub league standings of the North American League with 26 points. She trails only Beezie Madden (USA) with 48 points and Brian Moggre (USA), who has 41 points. On the west coast, Karl Cook (USA) remains atop the standings with 49 points, while Ashlee Bond (ISR) is second with 39 points. Potter (USA) moved into third with 32 points.