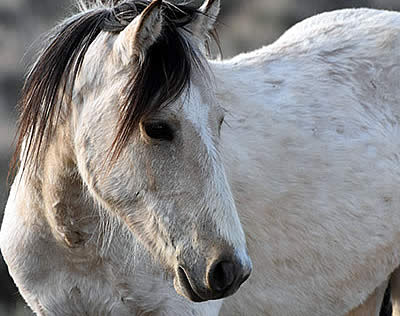 It was difficult to keep my mouth shut as a first-time attendee at last week’s BLM Advisory Board meeting in Washington, D.C. Thankfully, Ginger was there to hold me in my seat during the usual ‘party line’ rhetoric.

We heard that our “wild horses are overpopulated and starving,” that “PZP doesn’t work,” and perhaps the crowning jewel of ignorance and anti-democratic sentiment came from Acting BLM Director Pendley, as he referred to the required NEPA process as a “terrible burden” (a process which allows the public to have a voice in governmental actions, and requires that environmental impacts be assessed). Sadly, I believe he was sincere when he made that statement.

With this comment, Pendley displayed his gross disregard for the democratic process and the preservation of America’s cultural and natural resources. After observing the new Advisory Board in D.C., it was painfully obvious they’re toeing the party line.

It is clear the Department of the Interior is stacking the deck, and in such an overt way that it could come back to bite them in the long run.

They sent a clear message with their highly unusual move not to reappoint Ginger Kathrens, a board member more than willing to serve a second term. Their message was: we do not entertain opposition, and the “humane advocate” role is only a nominal title.

We have only to look at Ginger’s replacement on the Advisory Board to see the truth of this. She has some domestic equestrian experience, but has no evident experience with wild horses and burros at all, according to her own BLM bio. Compared with Ginger’s more than 25 years of observing and documenting these animals in their natural environment, we can draw no other conclusion than that they don’t want real advocates with real experience voicing real facts about what’s happening on the range.

As you know, The Cloud Foundation has always prided itself as being a voice of reason, not reaction. And yet, we must concede the writing is on the wall this time.

Our wild herds face an unprecedented attack and a smear campaign that was highly organized by people spouting livestock lobby rhetoric – from the old “non-native” nonsense to the claim that wild horses are overrunning our western rangelands (laughable when they only exist on 12% of BLM lands to begin with).

Make no mistake, this is a marketing campaign with one objective: to sell Congress and the persuadable public a story, one that vilifies our horses and romanticizes the tiny percentage of mom-and-pop livestock permittees, while deliberately obscuring the damage to public lands from livestock grazing and energy development.

Sadly, two of the nation’s largest domestic animal welfare groups – ASPCA and HSUS – along with a once-respected wild horse sanctuary – Return to Freedom – have fallen prey to this anti-wild horse PR campaign. They have joined with a coalition of private livestock interests to launch a “plan” whereby 130,000 wild horses and burros could be removed from our public lands in the next 10 years and warehoused at taxpayer expense – a cost of “5 billion dollars over 15 years,” according to Acting BLM Director Pendley.

Is there a more sinister objective lurking behind the scenes? Our wild horses and burros are the only wildlife species that is defined by the land on which they live. The 1971 Act protected them “where presently found” – remove them from the land, and the land could be vulnerable. In a political climate where the Acting Director of the Bureau of Land Management doesn’t even believe federal public lands should exist – well, the danger is clear, and it is present.

While in D.C., Ginger and I, along with other advocates, spent days meeting with Congressional and Senatorial staff members – the real people on the ground who wanted to know what the real issues are.

What we heard time and again was encouraging:

1) Your letters, your emails, and most of all, your calls DO matter! So many times, we heard that “whenever wild horse issues come up our phones are ringing off the hook” – they said THIS more than anything made them sit up and pay attention. So NEVER feel that your efforts are in vain. Your voices are heard. You ARE making a difference.

2) “They don’t have a plan.” The staffers we spoke with are understanding the message – they’ve been given bogus information. They no longer trust BLM or the lobbyists from ASPCA and HSUS pushing the misguided idea for massive removals. They are seeing through the fake news that wild horses are overpopulated. One conservative congressman’s aid threw up his hands and exclaimed, “They’re asking for millions of dollars and they don’t even have a plan!”

Things often look darkest before the dawn, so this is not the time to give up. This is the time to raise our flags, mount our metaphorical steeds, and charge.

The Cloud Foundation will be hard at work with other advocates and organizations in the days ahead. We’re educating the people who matter and we’re offering alternative solutions.

We need your help! No matter who you are or where you live, your voice can make a difference. Call the offices of your legislators today. Find their phone numbers here: https://www.usa.gov/elected-officials.

We always urge you to call, as this action makes the biggest impact.

But here’s another option, an amazing organization that gets your voice heard: they’re called the Herd on the Hill (we have to smile at the ‘herd’ pun!). They will hand-deliver your letters or other materials to your representatives, help you schedule calls with relevant staff, or even set up in-person meetings if you’re in the D.C. area.

And the people – 80% of them – want America’s wild horses protected, living wild and free as symbols of the spirit of this nation.