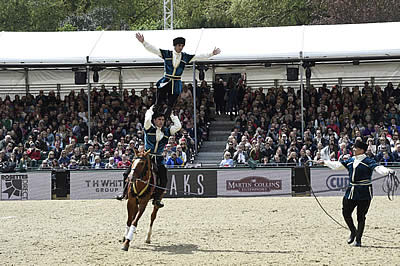 CHI Royal Windsor Horse Show is delighted to announce a spectacular line-up of displays at the 75th annual Show, taking place from 9-13 May 2018.

The Show has an exciting programme for its visitors throughout the week. Returning to Windsor, having previously performed at Her Majesty The Queen’s 90th Birthday Celebration in 2016, will be the Equestrian Federation of Azerbaijan, with their new performance ‘Land of Fire – Azerbaijan’.

The display celebrates the Karabakh horse, the native horse of southwestern Azerbaijan. Ten horse and rider combinations will be seen combining fast paced movements with tight turns and perfectly timed executions. They will be accompanied by the ‘Sarhadchi’ dance ensemble who will be performing traditional dances alongside two fire-jugglers performing a spectacular fire show. The performance, choreographed specifically for Royal Windsor Horse Show, demonstrates the strength and bravery of the Karabakh horse, and the courage and peacefulness of the Azerbaijan people.

Azar Hamzayev, Land of Fire – Azerbaijan Coach, said: “We are very excited to be returning to Royal Windsor Horse Show and to be showcasing a performance which captures our heritage, in front of the fantastic crowds. It’s a great opportunity to celebrate the Karabakh horse, and the traditional culture of Azerbaijan.”

The Household Cavalry Mounted Band will be adding to the line-up of equestrian displays. After being formed in 2014 by the union of The Band of The Life Guards and The Band of The Blues and Royals, the two mounted bands of the British army. The band today combines State Trumpeters, mounted, marching and concert bands as well as smaller ensembles. They will appear in their gold State Dress as they do whenever a senior member of the Royal Family is present. They will be performing alongside the Musical Ride of the Household Cavalry who appear every year at Royal Windsor.

Show Director, Simon Brooks-Ward, said: “It is a landmark year for Royal Windsor Horse Show so we are delighted to have an exciting overseas display which is steeped in tradition alongside a wonderfully traditional British military band to join us in the 75th anniversary celebrations.”

Crowd favourites returning to the private grounds of Windsor Castle include The Land Rover Shetland Pony Grand National, where the mini jockeys and their Shetland Ponies fearlessly race head-to-head, as well as the DAKS Pony Club Mounted Games, which will see teams from the Republic of Ireland, England, Scotland and Wales compete in a series of fast and furious races set to get the crowd cheering. Spectators can also expect to see The Musical Drive of The King’s Troop Royal Horse Artillery, the return of the Coaching Marathon, the Best Turned Out Trooper competition and the Skill at Arms amongst many other fascinating competitions and displays that can only be found at Royal Windsor.