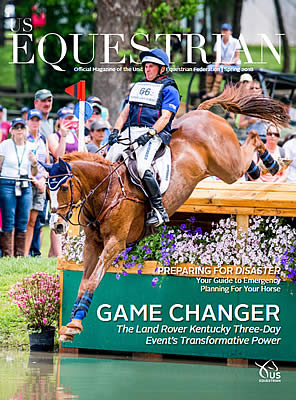 The Land Rover Kentucky Three-Day Event, North America’s only CCI4* and the venue for the Land Rover/USEF CCI4* Eventing National Championship, takes place at the Kentucky Horse Park April 26-29 this year. Only a handful of riders each year get to take to the park’s manicured rings and rolling grass galloping lanes, and, when they do, many describe the experience as transformative — one that helped them and their horses learn, grow, and rise to a new challenge. The equestrians and their four-star horses occupy center stage at this important American event, but they’re not the only ones who make the competition tick: the numerous volunteers and officials behind the scenes also have an inspiring story to tell.

We asked a group of the Kentucky Three-Day Event’s veterans — not just riders, but also an owner, a licensed official, and a longtime volunteer whose team decorates the iconic Head of the Lake combination — to give us a glimpse behind the scenes with their first-person perspectives on the competition and on what this great sporting pageant means to them. Regardless of their roles, whether in the saddle or on the ground, all shared a common sentiment, the one that serves as the heartbeat of the Land Rover Kentucky Three-Day Event: it’s all about the horse. Read on for their perspectives on one of the country’s most famous competitions.