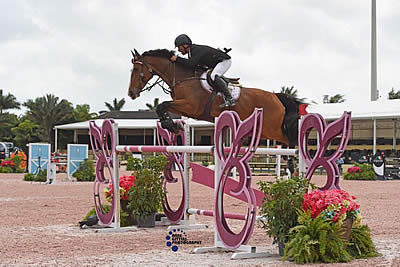 Wellington, FL – April 18, 2018 – Todd Minikus of Lake Worth, FL welcomed another successful week of competition during the second installment of the ESP Spring Series at the Palm Beach International Equestrian Center (PBIEC) in Wellington, FL after taking a first-place finish in the $35,000 ProElite® Grand Prix last week. Minikus once again piloted the Quality Group owned Quality Girl to the blue ribbon in the $25,000 ESP Spring II Grand Prix, after a speedy run around the fast track, designed by Anna Catalina Cruz of Mexico in 35.281 seconds, before taking the $35,000 ESP Spring II Grand Prix aboard Amex Z.

Minikus brought his A-game once again, capturing his third Grand Prix win of the ESP Spring Series. The duo bested the class of 36 horse-and-rider combinations, finishing out ahead with a final jump-off time of 32.929 seconds.

“It’s taken me a little while to get her [Amex Z] going my way,” commented Minikus, “and now we’ve really got it. I decided to take the winter in slow motion with her because to come out and do those 1.40m classes during WEF with hundreds in it, it just didn’t make sense. We spent the winter training up and it’s really paying off. She’s a great mare and I expect some big things from her. We’re looking at potentially the WEG with her. I’m maybe a few weeks behind, but now we’ll come out and start jumping the bigger classes. She’s already gotten a few nice ribbons here and hopefully we’ll be seeing more Grand Prix wins together.”

Of the ESP Spring Series, Minikus concluded, “These shows are great. I love them. It’s fantastic to be able to come out and get some of the younger and up and coming horses mileage in the big ring, with the same course designers that we had during the main circuit. Quality Girl had most of the winter off and Amex Z too, so, to be able to come out and jump in the big ring again over nice courses is great.”

Margie Engle trailed just behind after crossing through the timers in 36.23 seconds on her seasoned mount Indigo, owned by Gladewinds Farm Inc., Griese, Garber, and Hidden Creek. Third place went to Celso Ariani of Wellington, FL and Ukulman de la Nutria, owned by Ricardo Romero, after stopping the jump-off clock in 37.619 seconds.

It was a “girls’ day” no doubt in the $25,000 ESP Spring II Grand Prix on Friday, April 13. After Minikus secured first aboard Quality Girl, Michelle Guardino’s Fancy Girl was ridden to the second-place position with Willie Tynan of Wellington, FL after finishing the jump-track in 38.86 seconds. Margie Engle of Wellington, FL rode Bockmanns Lazio, owned by Gladewinds Farm Inc., to third place in a swift 36.239 seconds, but ended the second round with four jump faults.

The $10,000 Open Welcome Stake was another successful ride for Emanuel Andrade of Wellington, FL and his own Jenni’s Chance, who raced to the win in 33.219 seconds. Todd Minikus of Lake Worth, FL and Chris Brem’s Amex Z kicked off their week with the second-place finish, crossing through jump-off timers in 34.174 seconds. Alexis Trosch of Wellington, FL and her own Cantara Z rounded out the top three in 34.865 seconds.

The $5,000 Omega Alpha 1.35m Open Stake saw Todd Minikus of Lake Worth, FL and Lord Calador, owned by Melissa Bilodeau, take top honors after stopping the jump-off timers in 32.779 seconds. Abigail McArdle of Barrington, IL and Chuck Berry 8, owned by Plain Bay Sales, captured second place with a time of 33.483, ahead of Peter Lutz of Waccabuc, NY aboard Camillo VDL, owned by E2 Show Jumpers, with a time of 34.224 seconds.

The $1,500 NAL Children’s/Adult Jumper Classic awarded the win to Jorge Gomez of Loxahatchee, FL and his own Dallas de la Bonnett, with a jump-off time of 26.586 seconds. Avery-Anna Hogan of Wellington, FL and Eurocommerce Tampa, owned by Hogan, were presented with second place after completing the track in 27.406 seconds. Hogan also placed third with her own Zenith Z collected third place in the class with a jump-off time of 28.91 seconds.

Stephanie Nell of New Fairfield, CT was the winner of the $1,5000 Low Adult Jumper Classic riding Cash Advance, owned by Julian Cournane, who completed their jump-off time in 42.446 seconds. The red ribbon was awarded to Lauren Bardy of West Bloomfield, MI and Epic, owned by Leslie Howard and Uri Burstein, after completing their round in 47.093 seconds. Cynthia Screnci of Boca Raton, FL and Vichy, owned by Volado Farms, rounded out the top three, achieving a jump-off time of 39.39 seconds but with four added faults.

Charlotte Matthews of Bayville, NY and Sagamore Farms-owned Tinto des Contes topped the $1,500 Low Children’s Jumper Classic after securing the win with a jump-off time of 40.824 seconds. Kayla Walker of Jamaica Plain, MA and River Run Farm LLC’s Middlemarch finished in second place with a jump-off time of 42.132 seconds, ahead of Stephanie Garrett of New York, NY and Westwind Equestrian’s Dusty S Z, who completed the track in 42.143 seconds.

Victory in the $1,500 M&S Child/Adult Jumper Classic was awarded to Allyson Blais of Boynton Beach, FL riding LandaniMA, owned by Blais, after completing the jump-off in 37.24 seconds. Second place was awarded to Stacey Mahoney of New York, NY and Charisma Blue, owned by Mahoney, riding to a time of 38.75 seconds. Third place honors were presented to Kyle Olson of Pawling, NY and Wilhelmina who passed through timers in 38.769 seconds.

Ellen Toon of South Salem, NY rode Mirror Image to champion honors in the Amateur Owner Hunter 3’6″ division, while reserve honors were awarded to Laura Sexton of Greenwich, CT and Set To Music, owned by Sexton.

Debi Maloney of Honeoye Falls, NY aboard Fortitude, owned by Maloney and Sarah Cressy, secured champion honors in the Adult Amateur Hunter Division, ahead of Christina Plichta of Wellington, FL aboard her Rightfully So, owned by Purple Lane Farm, LLC.

The Modified Hunter Division saw Anabella Cottone of Davie, FL and her own Aurora take champion honors for their performances throughout the week, while reserve champion was presented to Alliyah Antoniadis of Middletown, NY and True Colors, owned by Joe White.

The Walk/Trot Division saw Caitlin Sweeney of Oyster Bay, NY and Golden Ticket, owned by Cheryl Amaral-McKee, ride to the division’s top honors ahead of Madison Chouinard and Persnickety, owned by Hannah Randolph, who finished with reserve champion honors.

Lainie Wimberly of Ridgefield, CT captured a tricolor ribbon, aboard For Freedom, owned by Laurie Stevens, in the USHJA Hunter 3′ Division. Wimberly and Santiago, owned by Stevens, finished as reserve champions.