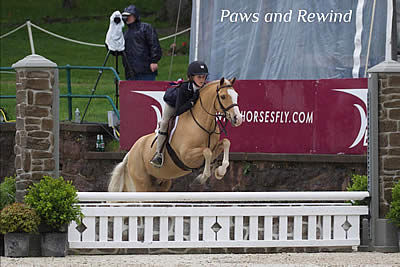 Helen Ryan and Charming. Photo by Paws and Rewind.

GLADSTONE, N.J. — May 5, 2019 — The final day of the 2019 Garden State Horse Show, produced by the Junior Essex Troop, wrapped up competition with hunters returning to USET Main Ring at Hamilton Farm. The bright jumper fences from the previous night’s $25,000 EquiJet Grand Prix were tucked away for the more classic hunter fences to be contested by junior riders with both horses and ponies. Championships were awarded for pony hunter divisions as well as children’s and junior hunters. Helen Ryan piloted her small pony hunter, Charming, to a combined score of 171.00 to seal the deal in the $1,500 Pony Hunter Classic.

Pony and Junior Hunter riders had the opportunity to participate in classic rounds, both of which offered $1,500 in prize money. Large, medium, and small ponies were combined for the $1,500 Pony Hunter Classic with the top 12 entries returning for the second phase. As one of the final competitors, small pony rider Helen Ryan combined her original score of 85.00 points with an 86.00 for the victory with her 11-year-old German Warmblood Pony, owned by Town Line Equestrian LLC.