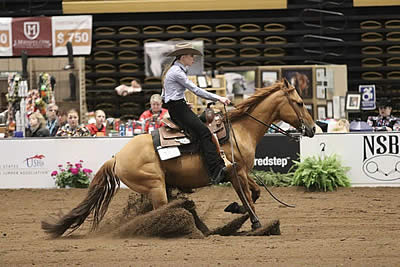 Julia Roshelli and Louise, owned by University of Findlay. Photo by alcookphoto.com.

Syracuse, N.Y. — May 5, 2018 — The final day of the 2019 Intercollegiate Horse Shows Association (IHSA) National Championships featured the conclusion of the Western divisions. This year, the IHSA is celebrating the 40th anniversary of the Western Divisions. Young men and women from across North America qualified to compete at the Expo Center at the New York State Fairgrounds in Syracuse. The University of Findlay successfully defended their 2018 title and took home the trophy for the second consecutive year with 49 points. The University of Wisconsin-River Falls was named reserve champion with 41 points and Ohio State University was a close third with 39 points.

Spencer Zimmerman, who became the Findlay Oilers’ head coach for the 2017-2018 season, is now two-for-two.

“We have a lot of the same riders that we had last year, but it’s a horse show so anything can happen,” Zimmerman said. “They came in with their A-game. They had the mindset and the technique and the tools. It was a lot of fun to see.”

Three Findlay team seniors just had their graduation day. The team will start back up in August and the riders will have to earn their spots on the team for next year.

“We won’t have a whole brand-new team, I’m sure, but they’ll all be fighting for their spot on the team again,” he said.

This is the University of Findlay’s seventh IHSA AQHA Team National Championship.

“It’s a little unreal,” Roshelli said. “This has just been a huge goal of mine, you know, for all four years.”

This was Roshelli’s first full year competing in the open division.
“From day one I was going for this and I’ve worked hard and my coaches have helped me along the way. It’s a great way to end my senior year.”

Roshelli rode Louise, owned by the University of Findlay, in the AQHA High Point Rider Reining Phase and Sarah from Alfred University in the AQHA Open Horsemanship, which helped to seal the deal for the Findlay team.