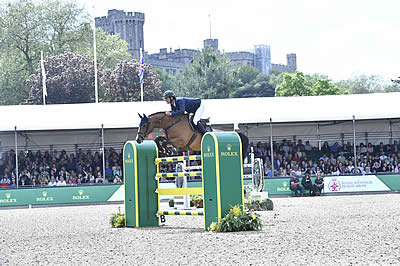 Geneva, Switzerland, 7 May 2019 – From 8–12 May, more than 55,000 spectators will enter Windsor Castle’s stunning private grounds – an opportunity available to the public just once a year – to witness five days of spectacular equestrian competition. CHI Royal Windsor Horse Show will climax on Sunday when a world-class line-up of horse and rider combinations compete for the coveted Rolex Grand Prix title.

A GLOBAL PRESENCE FROM ROLEX TESTIMONEES
Triumphant here in 2018, and having just won his third FEI Jumping World Cup Final, Steve Guerdat of Switzerland will be returning to the show as the World No. 1. Guerdat, a Rolex Testimonee, said: “I have always loved competing at Royal Windsor, and last year was the first five-star competition Bianca and I won together, making it even more special, so I am really looking forward to returning to the show.”

USA’s Kent Farrington, one of the boldest riders on the circuit and winner of the Royal Windsor Grand Prix in 2016 and 2017, will be determined to challenge his fellow Testimonee for top honours. Joining them will be Rolex Testimonee Scott Brash, the only rider to date to claim the Rolex Grand Slam of Show Jumping title, winning the Grand Prix at three consecutive Majors. The British rider is sure to be a formidable opponent, as he feeds off the passionate support of his home crowd.

A further challenge will come from Ireland’s Bertram Allen, Rolex’s youngest Testimonee and a member of the New Guard, who will be looking to improve his seventh-place position from last year. Canada’s Eric Lamaze will also be in contention, along with the 2018 FEI World Equestrian Games individual silver medallist, Switzerland’s Martin Fuchs, and 2016 Olympic team gold medallist, Kevin Staut of France, all of whom are members of the Rolex family of Testimonees.