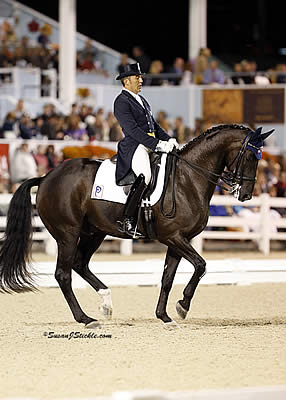 Wellington, FL (April 17, 2015) – After twelve weeks of top-notch competition at the Adequan Global Dressage Festival, the world’s richest dressage circuit ended with continued success from the Piaffe Performance Farm team. It’s no surprise to Dr. Cesar Parra, founder and owner of Piaffe Performance, that his team would continue to score in the ribbons until the very end. Parra dedicates himself to training both horses and riders at Piaffe Performance.

Parra himself brought in the wins throughout the season. During the circuit’s last week, he rode Van the Man, a 2002 Dutch Warmblood sired by Obelisk, in the extremely competitive FEI Grand Prix and FEI Grand Prix Freestyle in the CDI-W. They finished the weekend with a 72.275 percent. Parra also successfully competed Blickpunkt 4, a 10-year-old 16.2-hand dark chestnut Westphalian gelding, owned by Eduardo Fischer, in the show’s final CDI-W small tour.

Barbara (Bebe) Davis, who enjoyed a successful season as part of team Piaffe Performance, lived up to expectations through Week 12. She rode her family’s horse, Rotano (Rotspon x Bona Dea, by Brentano II) to win her FEI Freestyle Test for Juniors. Davis and the 14-year-old Hanoverian gelding also achieved two second places throughout the week.

Kathryn (Katt) Mills commuted to Florida from Pennsylvania during the winter season and rode Fabiano at Third Level. Successful throughout the circuit, she received two blues and a red in the final week. Mills’s German-bred Fabiano (Florencio I x Estocha, by Ehrentusch) is a bay Westphalian gelding bred by Sigrid Farwick.

When not earning top scores in the show ring, Parra was on the show grounds brightening the days of the Adult Amateur community. Parra is strongly dedicated to giving back to dressage, especially to the Adult Amateurs who he calls the “backbone of the sport.” He sponsored the Piaffe Performance Adult Amateur Awards throughout the season; choosing a deserving competitor to receive the recognition each week of the circuit. Award winners were thankful to Piaffe Performance for supporting amateurs and encouraging them to continue competing and improving.

As a sponsor of the Adequan Global Dressage Festival, Piaffe Performance also sponsored two Hospitality Booths near a bit check station and warm-up ring during Week 12. Riders enjoyed the chance Piaffe Performance provided to grab some cold water bottles and rest in the shade during the heated competition in the Sunshine State.