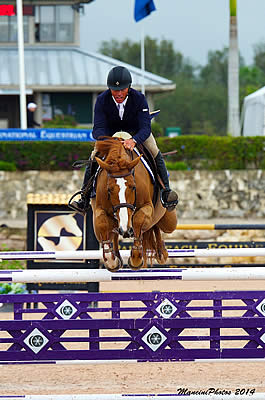 Wellington, Florida (April 16, 2015) – Vita Flex Victory Team rider Todd Minikus had a grin as bright as the Lugano Diamonds that were sponsoring the $150,000 Grand Prix CSIO 4* that he and Babalou 41 won during the 2015 Winter Equestrian Festival in Wellington, Florida. Minikus switched up horses after the Wellington winter show circuit to continue winning – on his well-known partner Quality Girl in the $34,000 Elm Rock Prix 1.45/1.50m CSI5* at the Longines Global Champions Tour of Miami Beach earlier this month.

Minikus said the ten-year-old Oldenburg (Balou du Rouet x Silvio I) mare Babalou 41, owned by Two Swans Farms, was “starting to step up into the big leagues.” Before winning the $150,000 Grand Prix, the pair put in double clears during the same weekend to lead the U.S. to a win in the $100,000 Nations Cup.

“I am very excited about Babalou 41. There are some bigger things coming, so I could not be happier. She has been fantastic,” Minikus continued. “It was a horse race across that ring. She slowed down and got real patient to the last jump – that was a sign of her maturity. The rest was just nail-biting in the schooling area. For sure my time was fast. You have to go fast to catch her, but some days you’re the bug and some days you’re the windshield, and that’s how it works.”

At the Longines Global Champions Tour of Miami Beach, Minikus jumped to victory on another mare. He and the Oldenburg Quality Girl (Quidams Rubin x Dobrock), owned by Quality Group, cleared the course in 54.41 seconds – proving uncatchable for runner-up Marlon Módolo Zanotelli of Brazil with Zerlin M at 55.85 seconds, and Venezuela’s Pablo Barrios with Zara Leandra at 56.76 seconds.

After his impressive win, Minikus humbly pointed to Quality Girl for their success: “I let her just do her thing. Normally, it turns out well.” It certainly seems to keep turning out that way for talented Minikus.

The Vita Flex Victory Team champion Todd Minikus credits a well-planned training program supported by conscientious nutrition and supplements from Vita Flex as a winning formula to a successful season: “The proof’s in the pudding – we’ve got some of the top winning horses in the country,” he comments about why he makes sure to use Vita Flex® products.

Vita Flex will be with Minikus and his horses every stride of the way at the FEI World Cup Jumping Finals and beyond with advanced supplements specifically created for equine athletes. Vita Flex® products include health supplements, antioxidants, electrolytes, joint supplements, performance supplements, topical ointments, vitamins, and minerals. For more information about Vita Flex, its products, and the Victory Team members, visit www.vitaflex.com or call (800) 848-2359.