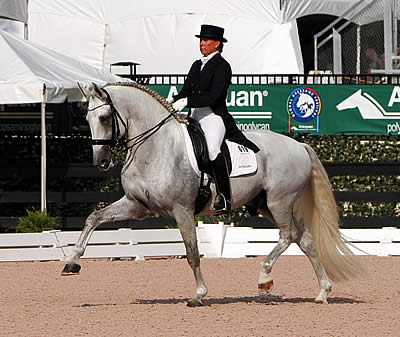 The March 25-28 Stillpoint Farm CDIO3* Nations Cup was the second of six legs of the 2015 FEI Nations Cup series and the top-off to a successful show season for Aragão and Interagro Lusitanos. With impressive scores posted in the FEI Prix St. Georges and the FEI Intermediaire I, Aragão and Baldor continued their successful season that began with their first FEI win in late February.

This was not Interagro Lusitanos’s first entry in the Nations Cup. In 2014, Zerbino Interagro competed with Kerensa Muller for The Netherlands Nations’ Cup Team at the Adequan Global Dressage Festival. In the same year, Aragão and Zepelim Interagro were part of the Brazilian team who dominated that year’s South American Games. Argentina, Brazil and Chile each sent a team of dressage riders to Santiago, Chile, to compete for the title of Nations Cup champion and a chance to qualify for the 2015 Pan American Games. Brazil achieved these goals when its team of four riders earned Team Gold with an overall score of 68.279%, besting the second place team, Argentina, by nearly three percentage points.

Aragão and Zepelim also notched winning scores in the FEI Grand Prix and the FEI Grand Prix Freestyle during the twelve-week South Florida season. Zepelim, an 11-year-old stallion (Quinárius Interagro-Ordenada Interagro, Yacht) whose sire is by the famous Xique-Xique, a Gold Medal Champion in Portugal, and whose dam is by Yacht, is the son of the foundation stallion of the Andrade line. The pair claimed win after win during the season, including a 69.063% in the Grand Prix Freestyle at the Palm Beach Dressage Derby National competition.

“Both horses are still beginners at this level,” Aragão said humbly. “Baldor is fairly inexperienced and he’s never been in such a big arena before. It’s a big change for him. My goal was to ride the tests as cleanly as possible to make them confident in the ring and to showcase their quality and potential.”

Aragão brought three Interagro Lusitanos to South Florida from Brazil to give them experience in the international arena. The third horse in the trio to make the trip from Brazil was Vade-Mecum Interagro, a 13-year-old Grand Prix gelding from the Xique-Xique and Yacht lines (Noblissimo Interagro-Pecunia Interagro, Yacht). While Baldor and Zepelim shine in the show ring, Vade-Mecum recently starred in a music video filmed in Wellington at Caroline Roffman’s Lionshare Dressage with internationally successful musician DSharp. After leaving Florida, Aragão and her mounts will return to Brazil to compete and train to ready herself and the horses for the selection trials for the 2015 Pan American Games.

“What is important for me is that they mature in each level before going to the next one. They need to understand their jobs and have fun at work,” Aragão said. “We have a CDI at the end of April and another CDI at the end of May. They are two big events that are in my plans for the next few months.”

The Interagro horses she brought to the U.S. epitomize the best in the modern Lusitano. Interagro Lusitanos, based in Itapira, Brazil, is the largest breeder of Lusitano horses in the world, with 40 years of experience breeding Lusitanos.

The Lusitano horse excels in everything from dressage and driving to working equitation. Interagro is committed to preserving the pure bloodlines of the Lusitano breed, and its own bloodlines include some of the most respected of the breed: Faraó (JHC), Nirvana Interagro, Ofensor (MV), Xique-Xique (CI), and Yacht (SA). Interagro has bred nearly 2300 horses in their 40 years of breeding Lusitanos. Their horses have graced the covers of international magazines 21 times.

Interagro is one of the most accessible and respected breeders in the world. They have hosted 24 national and 7 exclusive international auctions featuring premier Lusitano performance horses, in addition to 14 young horse auctions. Interagro’s Destination Lusitano program offers prospective buyers a chance for a relaxing getaway at the farm in Brazil. At Interagro, riders can enjoy the rolling Brazilian countryside by horseback or rest easy in a carriage pulled by a four-in-hand of Lusitano stallions. Guests can also watch the horses in their daily training sessions, take a lesson on prospective horses, and meet the living pedigree of generations of Lusitano horses. Destination Lusitano is a unique opportunity to purchase the horse of your dreams while enjoying the journey of a lifetime.

Founded in 1975 by Dr. Paulo Gavião Gonzaga to preserve the breed, Interagro Lusitanos is the world’s largest breeder and exporter of Lusitano horses. Dr. Gonzaga started with four mares and one stallion imported to Brazil from the breed’s native Portugal; to date more than 450 horses populate the 1200-acre ranch outside São Paulo. Today, Cecilia Gonzaga manages the farm and operations. To learn more, email interagro@interagro.com, or please visit www.interagro.com.br.