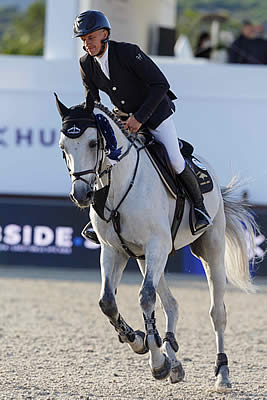 Incredible dam! The French Olivier Robert riding Vangog du Mas Garnier wins in the major event of the CSI 5* of the HUBSIDE JUMPING in Grimaud, after a breathtaking jump-off. Some 18 competitors out of 48 had managed to qualify for this second stopwatch race, including some big names from the current world ranking. While the Belgian Gudrun Patteet on Sea Coast Pebbles Z was given the winner of an event for which she signed a perfectly crazy jump-off, the Amazon will be overtaken by the supersonic couple Olivier Robert; it will finally take third place behind Julien Epaillard, the only one that the public thought capable of beating Olivier Robert. Arrived three hundredths behind Aquitain, the Normand, associated with Alibi de la Roque, to whom speed succeeds in an immense majority of cases, will have to be content this time with second place.

“I am very happy with this victory tonight! We were in somewhat complicated conditions today. Because of the wind, there were no trees around the obstacles, the course was very light, the time quite short which made the first round quite difficult. But there is such a level here that it takes that to decide between us. At least fifteen horses at the start this evening have already competed in major championships. It’s not nothing.

“At the jump-off, I took the option in front of number 2 after the double, which few other riders have tried, but I don’t believe that this is where I won the race. Besides, without taking this option, Julien Epaillard was ahead of me by a second and a half at split time! On the other hand, I took a lot of risks on the last two obstacles. This time, I chose not to take the option because it didn’t seem like the best solution. You have to believe that I did well.

“Van Gogh jumped really well today. To be honest, I hadn’t planned on going so fast in a jump-off before Sunday’s Grand Prix. I am very happy, but I hope I did not handicap my Grand Prix. I will try to work my horse well tomorrow morning, so that he recovers, and then, ‘Forward!’”