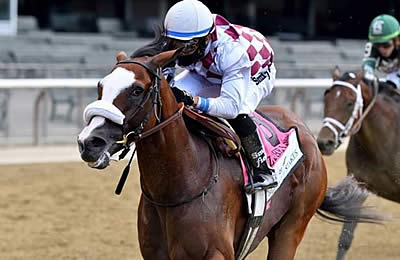 October 3rd will mark the start of the 2020 Preakness Stakes and the last of the Triple Crown races – all having taken place without any fans in attendance. Authentic continues to remain the fan favourite at the Preakness Stakes but there’s certainly some competition to overcome – so who are the front runners that may provide a challenge?

Belmont Stakes winner Tiz The Law continues to be the biggest name in contention – although it is still looking unlikely that Preakness is out of the question – trainer Barclay Tagg had stated it might be more prudent to wait for the Breeders’ Cup Classic, but with no final decision being made just yet it is still a possibility. Foreign oddsmakers may have jumped the gun a little here too as Tiz The Law would become 11-10 favourite assuming he attended the event.

Thousand Words has also been considered a good competitor despite taking a fall earlier in the month – trainer Bob Baffert said, “He didn’t have a scratch on him; he fell on his side, so we were fortunate. We’re planning on sending both Authentic and Thousand Words if they’re doing well” – a lucky escape for the trainers which could see two horses in contention for the win.

Following a 46-1 upset earlier in the year at Oaklawn Stakes, Mr. Big News had been one name popping up and with early uncertainty as Bret Calhoun wouldn’t commit to a next race – after being entered to the derby however the chance is certainly there to come away with another big upset victory and really break up the triple crown which has already been confirmed not to see a triple winner.

Following a theme of potential injury, Art Collector continues to remain a contender despite nicking his front left heel in training earlier in the month – trainer Tommy Drury stated, “I knew after we gave him a little anti-inflammatory that he’d be perfectly sound. We wanted him to respond well to it, and it looks like that’s what happened” – looking for a strong run at Preakness, the list of competition for Authentic is looking fierce.

Others who may have contended are already out, however, as Azul Coast likely won’t make an appearance – racing only twice since a February win with some poor performances along the way, trainer Bob Baffert confirmed via text message last month that he wouldn’t be attending the Baltimore race despite qualifying earlier in the year.

With Preakness being moved to the end of the derby, it will be interesting to see if it shakes things up – usually the second race in the running it likely won’t have any impact but it can always be a consideration especially for the jockeys – they’ll all be used to racing without fans in attendance, however, as the change has been in place since the start of the year and is looking unlikely to change any time soon – tune in on October 3rd to see all of the challengers, and with any luck some of the unconfirmed favourites will start to come through too.