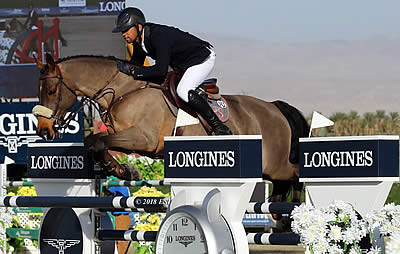 Two years ago, Nayel Nassar (EGY) won the World Cup qualifier at Thermal (USA) with his then 12-year-old Hanoverian gelding Lordan. In 2018, the partnership returned to form with a second victory in the desert, as the duo won the $100,000 Longines FEI World Cup Jumping™ Thermal, the final leg of the west coast sub league of the North American League.

Six combinations cleared the Alan Wade (IRL) designed track in the first round, and all produced a second clear effort in the jump-off. Beezie Madden (USA) and Breitling LS led early with a time of 39.92 seconds, but Nassar and Lordan, who also won the World Cup qualifier at Wellington (USA) last season, sped past them by nine-tenths of a second, crossing the timers in 39.02 seconds. Mandy Porter (USA) and Milano, who won the Longines FEI World Cup™ Jumping Sacramento (USA) in October, rounded out the top three with their 40.56-second time.

He’s such a trier,” Nassar said. “We know each other so well at this point, and we have a good partnership to get us through all the little intricacies in the courses.”

“He is such a trier! We have a good partnership to get us through all the little intricacies in the courses.” — Nayal Nassar (EGY)

Nassar said that Lordan’s naturally shorter stride might have played to his advantage in the jump-off, because he maintained a forward pace from the start.

“The first line was way more forward for me than anyone else,” Nassar said. “So, I was already faster there, and [also] probably on the turn back to the last line. I took a pretty big risk there. I jumped the double [from] right to left, and I could see all the tracks [from the other horses], and I was way inside there, and I just found the first shot out of the corner.”

After competing in Wellington last week, Madden made the cross-country journey from Florida to California to compete at Thermal. The trip proved worthwhile, because Madden’s runner-up finish jumped her from 11th to third in the east coast sub league standings of the North American League, which should put her safely in position for qualification to the Longines FEI World Cup™ Jumping Final in Paris (FRA) in April.

“I didn’t do that many World Cup [qualifiers] in the fall,” Madden said. I needed some more chances to get points. My plan might be to take him and one other [horse to Paris].”

The final leg of the Longines FEI World Cup™ Jumping North American League will take place on the east coast at Live Oak Plantation in Ocala (USA) on Sunday 18 March 2018.