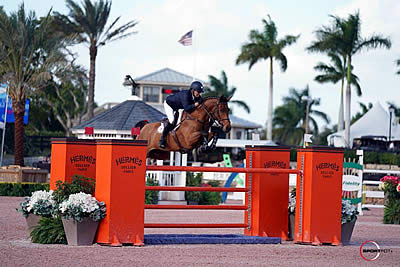 There were 43 entries in the $50,000 Equiline Grand Prix CSI 2*, and 11 of those went clear to the jump-off. The fastest in the second round was the last to go, Paul O’Shea (IRL) and Imerald van’t Voorhof, owned by Tequestrian Farms LLC. They left out strides across the course to finish in 36.84 seconds.

In their second victory of the week, McLain Ward and Bellefleur PS Z won the $70,000 Hollow Creek Farm 1.50m Classic CSI 5* over a field of 55 entries. There were 17 that advanced to the jump-off, and it was race for the nine double-clear rides. With the fastest time in the class of 35.93 seconds, Ward and Bellefleur PS Z graced the winner’s circle. The pair also won Friday’s $35,000 Bainbridge 1.45m Classic.

Second place went to Francisco Jose Mesquita Musa (BRA) on Catch Me Imperio Egipicio, owned by Daniel Aguiar Morelli, who stopped the timers in 37.09 seconds. Eve Jobs (USA) and her own Charleville were third in 38.19 seconds.

Week five came to a close on Sunday with a fantastic championship win by Erin Floyd from Austin, TX and Cymplify, owned by Don Stewart, in the UHealth Junior Hunter 3’3” 16-17 division. The duo, having only been paired together for a few short weeks, gathered enough points to best the class with a first, first, second, and third over fences.

“He basically feels like a rocking horse going around the ring,” said Floyd of the 11-year-old Hanoverian gelding. “I have only been showing him in the [Junior Hunter] 3’3”s for the past couple weeks, so I’m still getting used to him. He has been great throughout it all, even without getting in a perfect work routine.”