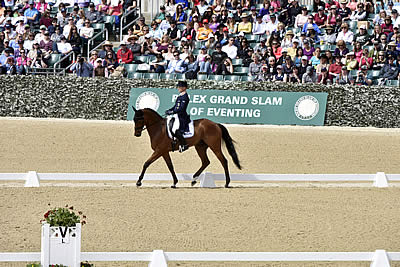 Lexington, USA, 24 April 2015 – Michael Jung stamped his class on the 2015 Rolex Kentucky Three-Day Event on Day 2 of the dressage phase by taking the joint lead on his second ride of the competition on La Biosthetique – SAM FBW. Jung also lies in fourth position on his other horse Fischerrocana FST, who was yesterday’s overnight leader. Jung is tied in first place with New Zealand’s Tim Price and Great Britain’s William Fox-Pitt is in third.

Unfortunately just minutes before Rolex Eventing Testimonee Zara Phillips was due to compete in her first Rolex Kentucky Three-Day Event in the dressage phase, Phillips had to withdraw due to her horse High Kingdom being lame, having picked up a minor injury earlier in the morning.

Jung has happy memories of the Kentucky Horse Park, having become World Champion there in 2010 and now has a double chance of claiming the Rolex title with both his rides going into the cross-country phase tomorrow in top form. However, Great Britain’s William Fox-Pitt who has won the Rolex Kentucky Three-Day Event title three times – in 2010, 2012 and 2014 – is in a strong position lying just 2.2 points behind Jung on his Bay My Hero, and is ready to defend his title.

The competition is extremely tight with 37 horse and rider partnerships within just one cross-country fence penalty so everything is to play for.

Michael Jung: “I feel very happy; both my horses have done a wonderful job. Sam was a little bit nervous but everything works well. It was a very big atmosphere and we are only at the beginning of the season and I am very happy about it.”

Tim Price: “I was very aware that it was a very strong field this year and that made the challenge quite serious – I came to do what I did today because he is a very capable horse and I just wanted to put my best foot forward. The preparation prior to the test over the last three days – just the suppleness of the horse and when we got into the ring today and the atmosphere gave him the lift and the extra dynamic I think to use to our advantage.”

Great Britain Performance Manager, Yogi Breisner, talking about the withdrawal from the competition by Zara Phillips riding High Kingdom: “Basically he is fine; about an hour before he was starting his warm up for the dressage test he kicked in the stable and split the skin (in his fetlock) so he had a wound which we tended to immediately straight away, but as Zara started to warm up it was quite clear that the horse was not 100% so we made the decision to withdraw him which was very very sad for Zara.”

The first ever Rolex Grand Slam of Eventing Trophy was officially unveiled today by Zara Phillips at the Rolex Kentucky Three Day Event. The magnificent silver trophy standing 60cm was specially commissioned in London and features four stars at the top, with three handles, each representing the three legs of the Rolex Grand Slam of Eventing made up of Kentucky, Badminton and Burghley.