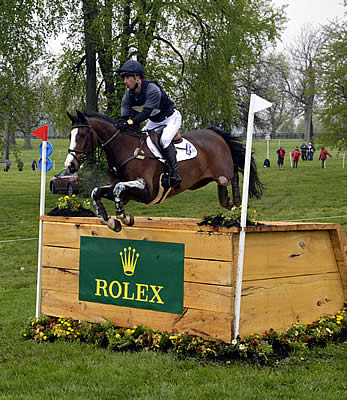 Lexington, USA, 25 April 2015 – New Zealand’s Tim Price put in a perfect performance on his horse Wesko with a superlative ride in the cross-country on his first time competing in the Rolex Kentucky Three-Day Event, with a clean double clear, keeping him in first place going into tomorrow’s final show jumping phase. Germany’s Michael Jung, the joint overnight leader, is in both second and third place on his two rides, with Great Britain’s William Fox-Pitt in fourth.

Despite the challenging conditions on the course with heavy rain throughout the morning, the riders from nine nations delighted the 31,500 fans that attended the Kentucky Horse Park for the cross-country phase.

Michael Jung was the first to go of the top three placed riders on his horse Fischerrocana FST, and gave another impeccable ride completing one of only six double clears. This set the bar high for the other chasing riders. Price was the next of the top placed riders to go mid-morning and he was thrilled with his ride finishing within the optimum time, despite being held out on-course due to a fence needing repairs.

Last year’s Rolex Kentucky Three-Day Event winner, William Fox-Pitt, was the 65th rider out on course and yet again he showed his world class with a clear round, but picked up 8.4 time penalties dropping him down one place into fourth position. Jung was 67th to go out, and under the now testing conditions, he guided his Olympic and World Champion horse La Biosthetique – SAM FBW to a clear round with just 0.4 of a time fault. This could cost Jung dearly in tomorrow’s final show jumping phase if Price can go clear and claim his first Rolex Kentucky Three-Day Event title – it will also put him on course for the $350,000 Rolex Grand Slam of Eventing prize.

Tim Price: “That was good, I think! I came home clear and in the time so that’s always the primary task. [I went the long way on fences 8 and 9] the last couple of years he has been a very honest horse – when he was coming up through to advanced level he had a couple of blips at little questions like that so I just thought it was one place to mind myself a little bit as it’s early on; he was fresh and can catch them out a little bit at the hollow – I just had a bit of a gut feeling and he’s very quick on the long way round; he’s tight on his turns and still had plenty of gas in the tank.”

Michael Jung, speaking after his ride on Sam: “I am very happy – he was really wonderful. He had a long break; he was finished after Aachen. My feeling here in the cross-country was very good. He was a bit looking also like my other horse at the hollow but on the other fences he was very, very good. He was galloping very well in the end – I was a little bit too easy and a little bit too slow but I am very happy about my round.”

William Fox-Pitt: “I am delighted with him. I was worried about the ground for him today; going at the end of the day the ground had really deteriorated – he is not a thoroughbred horse and hasn’t got the scopiest gallop and so I knew it was going to be hard work. He really worked hard all the way – he was fab; I was chuffed to bits with him; he was perfect over the fences working really hard all the way. Hopefully he will be feeling good tomorrow and he’ll jump well!”