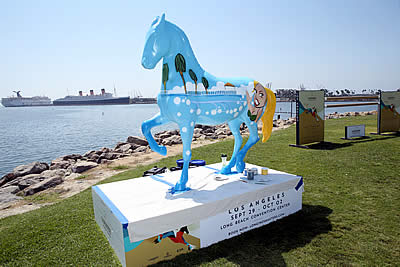 LOS ANGELES (Aug. 29, 2016) – August 29 marked exactly one month to go until the kickoff of season 2 of the Longines Masters Series, which will begin with the Longines Masters of Los Angeles September 29 – October 2 before traveling to Paris in December 2016 and culminating with Hong Kong in February 2017. The four-day competition at the Long Beach Convention Center will bring spectators fast-paced, heart-pounding international show jumping competition, with Title Sponsor and Official Timekeeper Longines leading the way to elevate the sport around the world.

“In exactly one month, the Longines Masters of Los Angeles will welcome the world’s top riders, luxury brands, one-of-a-kind artwork, and exquisite global cuisine to Long Beach to embark on the journey of the Longines Masters Series season two,” said Ameeuw. “We are so grateful to Longines for their continued global support and dedication to elevating the sport of show jumping on an international stage.”

Highlights from the event included:

In addition to the incredible riders who were in attendance at Monday’s preview, the largest number of Olympians to ever compete together on U.S. soil are preparing for the American leg of the Grand Slam Indoor of Show Jumping, the global three-leg competition known as the Longines Masters Series. Joining from Team USA will be Lucy Davis’s teammate and fellow silver medalist Kent Farrington, who will return to the Longines Masters to face familiar faces from the Rio games, including Team France gold medalist Kevin Staut, Team Canada bronze medalist Eric Lamaze and Team Germany bronze medalists Christian Ahlmann, Daniel Deusser, and Meredith Michaels Beerbaum. French superstar, World Number 2, and 2016 gold medalist Simon Delestre will also compete, appearing at the American competition for the first time after multiple appearances in Paris and Hong Kong.

A full rider list will be released in September to give spectators a glimpse of the world’s top-rated riders who will be exhibiting their skills and competing for the new Super Grand Slam Bonus at the Longines Masters of Los Angeles.