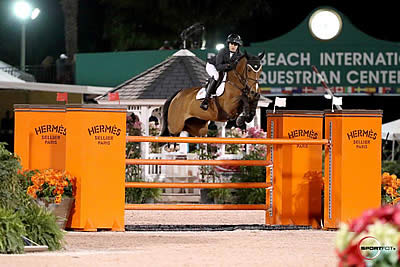 Wellington, FL – March 2, 2018 – Twenty-four-year-old Lacey Gilbertson (USA) claimed a victory in the $35,000 Hermès Under 25 Semi-Final Grand Prix riding Baloppi under the lights in the International Arena on Friday, March 2, during week eight of the 2018 Winter Equestrian Festival (WEF).

In Friday night’s class, 47 starters jumped the first-round track set by Ken Krome (USA) with seven pairs advancing to the jump-off. The top three finishers all posted fault-free rounds, making foot speed the deciding factor for the final placings. Gilbertson and Baloppi, an 11-year-old Danish Warmblood mare owned by Seabrook LLC, crossed the timers in a blistering 40.21 seconds for the win.

A new combination in the ring went to the winner’s circle in the $50,000 Hollow Creek Farm 1.50m National Grand Prix over 34 other competitors. Darragh Kenny (IRL) and Babalou 41, owned by Jack Snyder, were the only double clear in the class, winning on a time of 39.945 seconds.

Second place went to Rodrigo Lambre (BRA) and Mario Onate’s Chapilot, who had four faults in 38.513 seconds. Mario Deslauriers (CAN) and Bardolina 2, owned by Wishing Well Farm LLC, were third with four faults in 39.778 seconds.

Friday’s competition began in the DeNemethy Ring with Annabel Revers and Quax, owned by Beechwood Stables, LLC, claiming the blue in the Platinum Performance USEF Show Jumping Talent Search 3* class. The pair aced the open water jump and challenging course of bending lines and returned as one of the top 12 competitors to impress the judges in the flat test. Ava Stearns was close behind with a second-place finish aboard her mount, Mac One III, owned by Lauren Hough, and Emma Kurtz took third aboard Carl, owned by Dr. Betsee Parker.