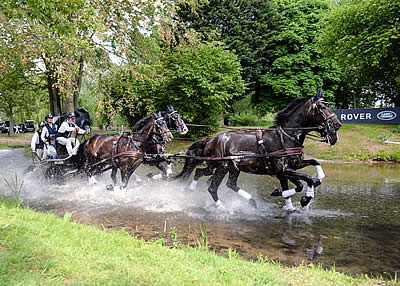 From Wednesday 9 – Sunday 13 May 2018, the private grounds of Windsor Castle will once again open its gates to the public, as Royal Windsor Horse Show returns for a spectacular 75th year.

With all eyes on Windsor ahead of the highly anticipated Royal wedding the following week, over 55,000 spectators are expected to attend the Show to enjoy the top-class sporting action, entertainment and shopping across the five days.

Having seen over 3,000 entries at the 2017 event, the Show remains the pinnacle of the equestrian calendar, and the only Show in the UK to host four of the eight FEI disciplines: Show Jumping, Dressage, Carriage Driving and Endurance. The recently upgraded 5* status attracts the sports’ most prominent competitors to the illustrious setting.

The CSI5* Show Jumping will be returning to the Castle Arena from Friday 11 – Sunday 13 May, including a Saturday evening performance, with the climax of the action, the Rolex Grand Prix taking place on the final day. Current World No. 1 and reigning champion Kent Farrington is sure to be hoping to return from injury to defend his title. Speaking after his victory in 2017, Kent said, “This is one of my favourite shows… There’s a combination of an amazing setting, an unbelievable crowd, top course designing and great footing… It’s on par with the best in the world.”

The CDI4* Al Shira’aa Dressage Grand Prix and Freestyle to Music will take place on the evenings of Thursday 10 and Friday 11 May, respectively. Riders will have the unique opportunity to be judged by Susan Hoevenaars, one of the judges at the upcoming FEI World Equestrian Games™ 2018, an unmissable chance for hopefuls heading to the Games this September.

The CAIO4* Land Rover International Driving Grand Prix, a FEI World Cup™ qualifier and one of the most important Driving events in the UK adds to the roster of top international competition at the Show. 2017 saw Boyd Exell score an impressive eighth victory at the Show, and the Australian is certain to be looking to retain his title as part of his FEI World Equestrian Games™ build-up.

Competitive Endurance action will take to Windsor Great Park on Friday 11 May as the CEI2* Royal Windsor Endurance supported by The Kingdom of Bahrain sets off around 120km of the countryside of Windsor and Ascot for the ultimate test of stamina for both horse and rider.

Over 120 Showing classes will join the four FEI disciplines in the action-packed schedule and, with many of HM The Queen’s horses regularly featuring in the starting line-ups, Royal Windsor Horse Show represents the height of the National Showing calendar. Competitors will be striving to follow in the footsteps of HM The Queen’s Barbers Shop to be crowned Royal Windsor Supreme Showing Champion on the final day of the Show.

The always popular Musical Ride of the Household Cavalry Mounted Regiment and The Musical Drive of The King’s Troop Royal Horse Artillery will be returning to present their powerful displays of skill and precision in the Castle Arena from Thursday to Sunday.

Joining them will be The Land Rover Shetland Pony Grand National, rousing crowds as the young jockeys and their ponies go head-to-head in a daringly fast race around the arena. The DAKS Pony Club Mounted Games will be adding to the crowd-enthusing entertainment as teams from England, Wales, Scotland, Northern Ireland and Republic of Ireland, compete in fast and furious races, set to entertain the entire family.

In between performances, spectators can enjoy Royal Windsor Horse Show Shopping which is packed with boutiques and brands for both equestrian and non-equestrian fans alike. With over 200 fashion and lifestyle stands, the shopping village offers something for everyone, as does the wide range of food and drink outlets distributed across the Showground.

In addition to the plethora of activities, the event presents spectators with the unique opportunity to experience the exceptional setting of the private grounds of Windsor Castle, with the notable backdrop of the Castle itself. As the Show celebrates its 75th birthday, Organisers are putting in place a series of displays and exhibitions both in and out of the arena to commemorate the diamond anniversary.

Tickets are available from just £9 and allow general access to the Showground; this year visitors can also upgrade to reserve a seat in the Castle Arena. The Show will be running a special Windsor Wednesday promotion for local residents, who will be granted free entry on Wednesday 9 May with use of the local Windsor and Maidenhead Advantage Card.

Additional packages are also available for the Windsor Enclosure and Members Enclosure, both of which offer exclusive bars and seating areas. The Windsor Enclosure was a popular addition to the 2017 Show, offering access to a dedicated bistro, bar, and pre-booked seating on the north-east end of the Castle Arena. The Members Enclosure offers exclusive access to premium seating alongside the Royal Enclosure, a Members restaurant, bar and terrace, all of which overlook the Castle Arena.