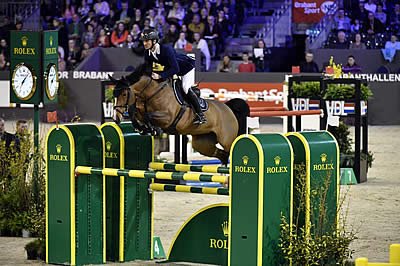 02 March 2018, ‘s-Hertogenbosch, The Netherlands – After a thrilling end to the 2017 international equestrian season at the CHI Geneva, with Rolex Testimonee Kent Farrington securing the Rolex Grand Prix at the event for the first time, all eyes now turn to The Netherlands where many of the world’s best riders will congregate on 08-11 March, for the new first Major of the year.

Since its founding more than 50 years ago, The Dutch Masters has focused on delivering elite-level sport alongside a rich tradition and love of horses. In 2017, The Dutch Masters (formerly Indoor Brabant) welcomed 60,000 spectators across four days of competition, as the sports elite riders contested the Rolex Grand Prix, the competition highlight. Such commitment to outstanding equestrian sport and a passion for excellence reflect Rolex values, and in 2014 the leading Swiss watch brand extended its long-term partnership with the event, enhancing its position as one of the most esteemed indoor shows on the calendar.

This shared approach to the pursuit of perfection has been globally recognized, and in 2017 it was announced that The Dutch Masters would join equestrian sport’s most coveted competition, the Rolex Grand Slam of Show Jumping, as the fourth Major in the cyclical calendar. It now sits beside CHIO Aachen, the CSIO Spruce Meadows ‘Masters’ and CHI Geneva. As such, the Rolex Grand Prix at The Dutch Masters in 2018 will draw the world’s best riders attempting to emulate the achievement of Rolex Testimonee Scott Brash, who in 2015 became the only rider to have won this most sought-after prize to date.

A demanding course is expected at the sport’s toughest Majors, and The Dutch Masters will be no exception. Having co-designed with Gérard Lachat (SUI) the Rolex Grand Prix at CHI Geneva, Louis Konickx (NED) is welcomed back for Sunday’s highlight competition. “I have designed a technically exacting course with the intention of testing these riders within one of the best indoor arenas around the globe,” Konickx said.

After his victory at the Rolex IJRC Top 10 Final at CHI Geneva, Rolex Testimonee Kevin Staut is well placed to contest for the Rolex Grand Prix. “It’s always a difficult course when designed by Louis, but I look forward to taking the challenge on and will do my best to repeat my winning success here in 2014.”

Along with the roster of elite show jumpers contesting the Rolex Grand Prix, The Dutch Masters will also host the world’s top dressage riders as they compete for title places in the World Cup and World Cup freestyle competitions. Numbered among these outstanding athletes is Rolex Testimonee Isabell Werth. With a trophy cabinet overflowing with Olympic, World and European Championship medals, the knowledgeable Dutch crowd is always excited to see the German maestro in action.

The Rolex family of Testimonees has been victorious in the Grand Prix four times since 2003, the most recent being French rider and world number four Kevin Staut, who claimed the Rolex Grand Prix in 2014 riding Silvana*HDC.

Canada’s Eric Lamaze will travel from his winter base in Florida, USA for the competition. With a string of successes already at the 12-week Winter Equestrian Festival in Wellington (Florida), it would appear Lamaze is in prime form to take up the challenge.

The crowd will welcome the return also of homegrown hero Jeroen Dubbeldam. As reigning World Champion and a former European Champion, Dubbeldam and SFN Zenith are a formidable partnership.

Rolex’s newest Equestrian Testimonee, Martin Fuchs, and youngest, Bertram Allen, will also be entering their top mounts for the competition. Fuchs will be one of two Swiss riders from the Rolex family of Testimonees, with Steve Guerdat journeying to the Dutch show with his mare Bianca XXXIV. Guerdat was recently voted Rider of the Year 2017 and Bianca XXXIV Horse of the Year 2017 in Switzerland.

British show jumper Brash will head to The Dutch Masters looking to further enhance his revered status in the sport.