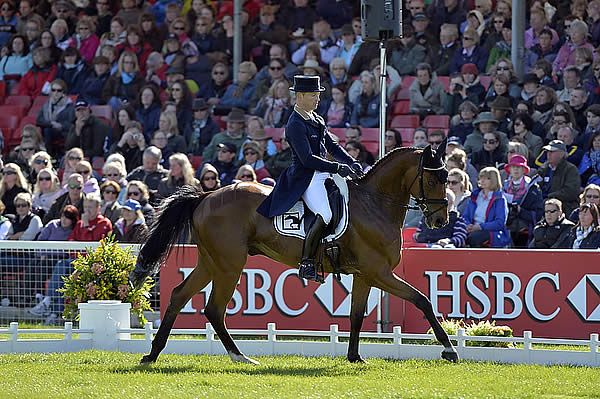 Lausanne (SUI), 4 May, 2013 – Olympic, World and European Champion Michael Jung (GER) punched the air in a rare show of emotion as he left the Dressage arena at the Mitsubishi Motors Badminton Horse Trials (GBR), fourth leg of the HSBC FEI Classics.

Jung, who is competing for the first time at Badminton, was visibly thrilled by the crowd’s response to his superb test on La Biosthetique Sam which earned a mark of 36.0 penalties and gives him a fractional lead going into tomorrow’s Cross Country phase.

“There is a lot of atmosphere here but Sam was relaxed and he did a fantastic job,” Jung said afterwards. “I didn’t know the result when I came out of the arena, but I had a very good feeling about it.”

When asked whether he felt under pressure to prove himself at Badminton, one of the few major prizes missing from his CV, 30-year-old Jung laughed: “Of course I was a little nervous, but I think the riders most under pressure here are Andrew Nicholson and William Fox-Pitt!”

Another Badminton first-timer, Italian army rider Stefano Brecciaroli (ITA), was also smiling broadly when he left the arena. He and his magnificent Belgian-bred horse, Apollo VD Wendi Kurt Hoeve, presented an elegant picture and surprised no-one when they were the first pair to score under 40 penalties. The Italian duo is lying second on 36.8 penalties.

Brecciaroli, who has won a CIC3* with Apollo on British soil this spring, was second after Dressage at the London Olympic Games last year, eventually finishing 19th. For the last month, the Italian has been based with his close friend Andrew Nicholson (NZL), riding the Kiwi’s horses during his absence on his winning trip to Kentucky, and Nicholson has tipped Brecciaroli to win this weekend: “I’ve been teaching him to go much faster across country!”

Jung’s three Olympic team mates are all in the top 13. Dirk Schrade (GER) and the smart King Artus posted one of their best performances to slot into third on 39.2; individual Olympic bronze medallist Sandra Auffarth (GER) is in equal seventh place with a mark of 41.3 on Opgun Louvo, and Ingrid Klimke (GER) is 13th on Butts Abraxxas.

The ever-sporting Klimke put a good face on what was, for her, a disappointing Dressage mark of 44.2. “It was like sitting on a five-year-old, not a 16-year-old,” she said of her double Olympic gold medal ride. “He was so relaxed outside, but the wind and the clapping made him want to change legs all the time. That was not our best test!”

The rising New Zealand star Jonathan Paget and his Pau runner-up, Clifton Promise, are fourth on 39.7. Paget has been training in Germany with Jung during the winter and his time with the German supremo is obviously paying off handsomely.

The Rolex Grand Slam is proving a thrilling sub-plot at Badminton and the two contenders could not be more closely matched. William Fox-Pitt is in fifth place on Parklane Hawk on 40.0 and Andrew Nicholson, the current HSBC FEI Classics leader, is sixth, a mere 0.2 of a penalty in arrears, on Nereo.

Nicholson is also 14th on Avebury and Fox-Pitt is equal 16th with Oslo in a closely-packed field in which 10 penalties covers the top 16 places.

Pippa Funnell (GBR), the only rider to have achieved the Grand Slam, 10 years ago, pulled off a superb piece of riding to be equal seventh on Redesigned, a horse that has been out of top level competition for three years.

Nicholson, whose best Badminton result is second behind Fox-Pitt in 2004, has been single-mindedly targeting the event for six months. “I’ve got two good horses that I have faith in,” he says.

“Avebury is the friendlier of the two, but he can be naughty if he thinks he can get away with it. If you don’t watch him when you turn him out, he’ll snatch the halter rope out of your hand and go galloping around, having a laugh. Nereo, who is a bit shy, is much more polite and is always 100% on your side.”

Fox-Pitt predicts that the anti-clockwise direction of the Cross Country course – it is reversed each year – offers the more rhythmic track. “I don’t think there’s a bogey fence,” he commented, “but the cumulative effect of so many technical questions will be influential. The last two to three minutes are particularly intense.”

Schrade comments that course designer Hugh Thomas (GBR) has produced every sort of question possible. “I think he will get what every designer wants, with faults around the whole course. It’s very well designed.”

Don’t miss a hoofbeat. Follow the live action on www.feitv.org.

FEI TV will be LIVE for tomorrow’s Cross Country, and Monday’s Jumping (6 May) at Badminton – see start times on www.feitv.org/live.

FEI TV, the FEI’s official video website, will be LIVE for Cross Country (5 May) and Jumping (6 May) at Badminton – see start times on www.feitv.org/live.