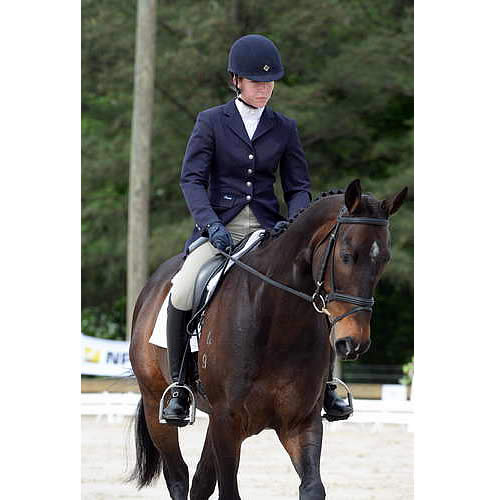 On Friday, May 3, competitors in three different divisions rode Dressage tests in the beautifully manicured Southern 8ths arena for the So8ths/Nikon Three-Day Event in the “Heart of the Carolinas.”  The riders, who traveled from several different states, seemed thrilled with the first day of the Long Format Event.

In essence the best Dressage scores set the tone for the remainder of the competition. If a horse and rider have a low score, and accrue no penalty points over the next two days, they come out on top.

First to go were the Training level riders.  Interestingly, these are the highest level riders at this event, which is geared for amateurs.  Coming in first place was Kaitlyn Mosing on her horse Powderhound with a score of 31.4. Second were Kathy Viele and Matariki.

Kaitlyn has been competing about 12 years, but she’s had this horse only a few months. Since Kaitlyn had never done a three-day competition, she thinks this will be a good bonding experience for her and her horse. This is their third Dressage competition, and she was pleased with her win.

She especially appreciated the perspective from the officials. “Everyone here is so welcoming and so eager to help you. It’s a great facility, and I’d recommend it to anybody.”  She’d like to return next year.

Sarah Zimmer and Mardi Gras won the Novice division. In Eventing, the scores represent penalty points, so the lowest score wins.  On the second and third day, penalties are assessed for mistakes on the cross country and show jumping rounds.  Again, low penalties — or none — are the goal of every rider.

Despite her horse being a little wound up, he delivered a stellar performance, Sarah said.  They actually had the best score of the day, 30.7. “I love the Long Format. I wish there were more of them. It’s like a whole different sport; it adds a lot and it’s more fun.” This is the only place where professionals come together and help the amateurs, she added. This is her second year at Southern 8ths and she thought the competition was great.  Finishing just behind her were Samantha Hay and Tre Jolie.

The Beginner Novice division is for horses and riders who are just starting their careers in Eventing.  Taylor Pence and her lovely mare Goldie put in a solid ride with a score of 32.8.

Taylor loved the judges’ advice and heeded it.  Goldie knows the difference between a schooling session and the show ring, and Taylor actually has to work a little harder in the ring because Goldie gets lazy there. The pair has been in five or six events. “It felt great to win, especially at an event of this stature.”

Two judges score each ride and combine their points for the final score.  Only .2 point separated the top riders in this division, with Carol Mahoney and Mercury Rising coming in second.

On Saturday the event continues with Roads & Tracks, Steeplechase, and Cross Country.