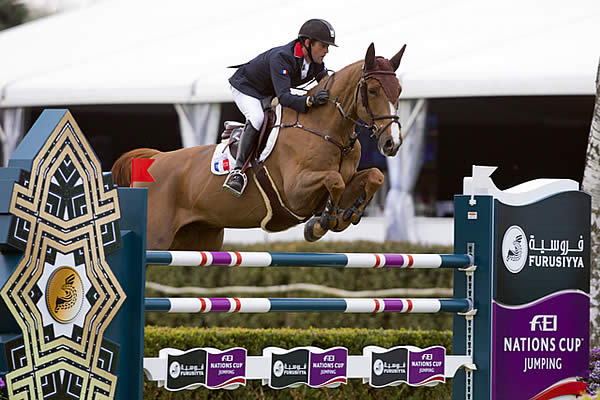 Lummen (BEL), 3 May 2013 – The French swept to a clear and concise victory in the Furusiyya FEI Nations Cup Jumping 2013 leg at CSIO 4* Lummen in Belgium today.  However they were pushed all the way by a highly-competitive and considerably less-experienced Swiss side that had to settle for runner-up spot in the final analysis, while The Netherlands finished a distance behind in third.

There were four countries seeking points towards qualification for the Furusiyya FEI Nations Cup Jumping Final which will take place in Barcelona, Spain next September and fourth-placed Finland earned 75 points, while fifth-placed Sweden took 70 and Belgium claimed 66 when slotting into sixth spot.  Great Britain was not in the points race when finishing seventh, so the Norwegian side that finished last of the eight competing nations claimed 64 points for their effort.

The French took the lead from the outset and never flinched.  Double-clears from Marc Dilasser (Obiwan de Piliere Jo) and Aymeric de Ponnat (Armitages Boy) placed them in a strong position and pathfinder, Jerome Hurel (Ohm de Pontual) was the only member of the side to drop a fence throughout the entire competition. French anchorman, Olivier Guillon, was clear first time out with Lord de Theize to ensure a zero team score and didn’t need to return to the ring in the second round as the result was already decided.

The Swiss had to count a single error from Martin Fuchs and Conte della Caccia in the opening round when their pathfinding partnership of Romain Duguet and Quorida de Treho left two on the floor.  And in the end that was the deciding factor, as that single fence separated the two sides at the end of the day when neither added any more to their scorelines.

Course designer, Lucien Somers, set out an interesting 12-fence challenge in the grassy Lummen arena.  The triple combination at fence five, and the following oxer at six with its 1.70 m spread were both influential.  It was at the latter that Sweden’s Lisen Fredricson second round came to an end when Thriller P threw in a refusal, and it was a tough day for the 37-year-old rider as she had already been eliminated for a fall in round one.

The Longines double at fence eight also made its mark, and Somers really put it up to them on the final run home with the open water providing the penultimate obstacle on the course.  The sign of a good track however is the ability of riders to show improvement over it as the competition progresses, and this was how it played out for the team from Finland who were lying second-last at the end of round one.

It was Anna-Julia Kontio’s 13-fault score with Fardon that was the Finnish discount at the end of the first round by which time they had already accumulated a team total of 14 after Kaarlo Kovacs (Agropoint Cassius) added five to the four collected by his pathfinding brother Henri (Carolus Z) and Maiju Mallat (Urleven van de Helle) also picked up five with a fence down and a time fault recorded by the Longines timing system.  Clears from Henri Kovacs and for Kontio seriously bolstered their position second time out however, and despite 17 from Kaarlo Kovacs and two mistakes for Mallat, their overall total of 22 was good enough to move them up three places in the final standings.

Unfortunately for the Norwegian team, their 15-fault first-round total left them sitting on the sidelines when only seven nations returned to battle in round two. The British filled that seventh spot when they added 25 more to their tally, their best result registered by Belgian-based Joe Clee and Diablesse de Muze whose only mistake was at the second element of the triple combination on their second tour of the track.

The host nation of Belgium, carrying 13 faults, struggled to leave the fences up once again, adding 13 more to maintain their sixth place at the end of the day. Reigning world champion, Philippe Le Jeune from Belgium, admitted that “at this level you can’t win if you keep making four faults.  One fence down is too much, clear rounds are the only things that win a Nations Cup. Our horses didn’t jump too bad but there were too many four faults” he said after his side registered a final score of 26.

Despite Lisen Fredricsson’s drama, Sweden managed to fill fifth place on a total of 24 faults while the Dutch held on to third spot even though they added 12 more to their scoreline.  The Swiss really kept the pressure on the leading French when Duguet produced a zero score second time out and Fuchs and Pfyffer followed suit.  In fact Pfyffer produced one of just three double-clears recorded in the class, and came in for high praise from Swiss Chef d’Equipe Renate Fuchs.  “Carlo is new to the team and did a great job” she said, adding that her son, 20-year-old Martin Fuchs, also gave a good account of himself.

French Chef d’Equipe, Philippe Guerdat, was well-pleased with his winning side’s performance.  “I wanted to come to Lummen with a strong team to ensure a good result ahead of the Furusiyya FEI Nations Cup in La Baule. We’re fairly lucky in France right now with a large pool of good riders and good horses. It’s not always easy to choose between the available riders, but we’re trying to make sure everyone feels involved and to give everyone the opportunity to compete in the various Nations Cups this season. The next Nations Cup for us will be in Drammen (Norway) where I will take five other riders” he said.

And he wasn’t the only happy team manager at Lummen today.  Finland’s Lors Parmler sees a real future for his side after today’s good finish in strong company. “I’m very happy with the performance of my team.  It’s a new team and we now have the Kovacs brothers, Henri and Kaarlo, competing for us.  They used to ride for Hungary until last year but they have a Finnish mother so they have chosen to ride for us.  They are two really nice boys and we really like having them on our team” he said.

And he continued “we were happy with the course, it was difficult enough for young riders like that but rideable, it was a course for forward riding.  Next week in Drammen we will have another team but we will use these riders again later in the year.  With the Kovac brothers I think we now have a bigger chance to pick up points in the Furusiyya series.”

So all sights are now on next week’s Norwegian fixture in Drammen as the Furusiyya FEI Nations Cup Jumping 2013 series begins to gather pace.

This Furusiyya fixture was part of Division 2 – Europe.

Course designer was Lucien Somers who has also experience as Chef d’Equipe of the Belgian team in previous seasons.

Kurt Graemeier from Germany is currently Chef d’Equipe for the Belgian side.

The youngest horse in today’s competition was the eight-year-old Dutch-bred chestnut mare Atlanta, ridden by Peter Bulthuis from The Netherlands.

Both France and Switzerland fielded just three riders in the second round as the results was already decided before the fourth-line rider was due to enter the arena for a second time.

Four countries were battling for points at this leg of the Furusiyya series – Belgium, Finland, Norway and Sweden.

Olivier Guillon, France – “My horse doesn’t do too many indoor competitions during the winter. So it was a good way for us to start the season.”

Swedish Chef Sylve Soderstrand – “We didn’t have high expectations because we brought a very green team and new horses.  I was very happy with Angelie Von Essen and Peder Fredricson.”

Belgian Chef Kurt Gravemeier – “I’m particularly pleased with the performance of Annelies Vorsselmans.  She was twice in the water but never touched a fence; it was a nice performance.”

Jerome Hurel, FRA, talking about the course – “It was fairly normal for a competition like this. I had a pole down at the first obstacle because I put too much pressure from the start but other than that, it went really well.”

Longines is the Official Timekeeper of the Furusiyya FEI Nations Cup Jumping series.

Longines’ passion for equestrian sports began in 1878, when a timepiece was made with a horse and jockey engraved on the watch face. Over the years, the brand has built strong and long-lasting links with equestrian sports. In 1926, for the first time, the brand was involved as timekeeper for the Official International Equestrian Competition of Geneva. Today, Longines’ involvement in equestrianism includes Jumping, Endurance and flat racing.