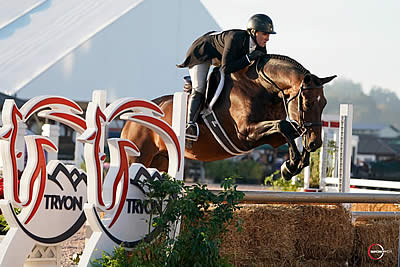 Julie Curtin and Point Being ©Sportfot.

There were 18 entries on hand to test the Joe Carnicom course in the first round, with Curtin earning appearance in the handy aboard four different mounts. “The course rode really nicely!” Curtin emphasized. “There was a lot to look at with the sunlight, shadows, and glares, but the course itself rode very nicely. There were really pretty jumps, and this ring [International Stadium] is great. The footing is really nice. It’s always a lot of fun to ride here.

“He’s an overachiever,” Curtin said of her own 2007 Warmblood gelding (Aachen x Unknown), “but he gets a little nervous sometimes, because he wants to do a good job. The hardest part is keeping him calm and collected so he knows he can do his job. He’s great, and he’s got the best jump in the world! He was so much fun today, and such a good boy.

“Going into the handy, we came in with a 92 and in the lead, so I just wanted to be smooth,” said Curtin of her second-round strategy. “Point Being can be a little nervous sometimes in the handy, so I just wanted to try to be tidy and nice, but smooth. It was almost like doing a different course because it was so bright the second time, and there weren’t as many shadows. He was a good boy and trusted me.”

Curtin was pleased to achieve third aboard Commentary, who is learning the ropes at the national level, she shared. “The horse that I was third on is just a green 3’3” horse, and he’s going to step up and do 3’6” classes next year, so this is really good experience for him. Hopefully we’ll start doing some big derbies! I was proud of him, too. He’s our little baby who we brought along.”

Sixteen entries competed over the Joe Carnicom course, and Threat also presented Margaret Wolfe’s Embrace, a 2008 Oldenburg gelding (Escapade x Zena), in the handy round to earn fifth on a score of 153. “The course rode amazing,” Threat recounted. “He [Asriel] was so spectacular in the first round. We had some issues in the second round, but he still went around amazing. It was such a fun course. It was probably the most fun I’ve ever had in a handy!

“‘Ace’ is very weird; he has a lot of quirks to him,” Threat admitted. “He’s a very hard ride. He’s hard to figure out, but thankfully I figured him out today. My strategy was just to give him the best ride possible. He’s hard, and it’s his first-ever derby, so I just needed to figure him out and give him some miles.

“I enjoy everything about TIEC,” Threat concluded. “I think it’s such an amazing facility. It’s so nice, and it’s built for horses and riders. There are so many fun things to do, too. Saturday Night Lights is the most fun!”