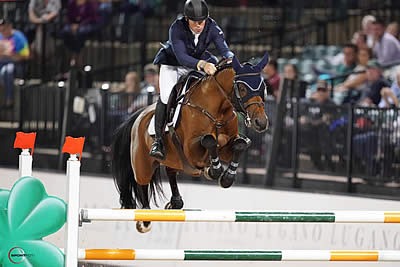 “I thought he did a very nice job; there were eight clean out of 50 so it was very well built,” Swail shared of the course designed by Michel Vaillancourt (CAN). “You needed a more experienced horse just to make sure and get the back rail. The beginning was tricky and then that double line caused enough trouble, and I suppose the combination was a little scopey since it was oxer to oxer.”

Swail confessed that the 2008 Holsteiner gelding (Clarimo x Lerano 2) owned by Vanessa Mannix, who he has been working with for a couple years, is not the easiest horse to ride: “He has his own mind sometimes and can be a little difficult, but when he goes well it normally ends up being a win.” Swail elaborated, “We have learned to work together very well now at this stage and we have a good relationship. The consistency is growing all the time; there’s a lot of good results.

“This is maybe a week early, but to win this is fabulous,” admitted Swail, who hopes to continue his winning streak for next week’s $384,000 Gary Sinise Foundation Grand Prix CSI 5*. “I won the [Rolex Grand Prix CSI] 5* last year on Rubens LS [La Silla Triumph]. This horse [GK Coco Chanel] is very capable of winning again next week and it would be great to get the double win. I’m looking forward to it.