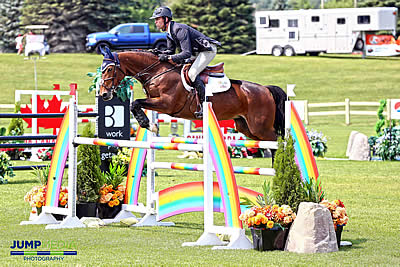 Ottawa, Ontario – The CSI2* Ottawa International Horse Show opened on Wednesday, July 20, with Jonathon Millar of Perth, ON and his wife, Kelly Soleau-Millar, each enjoying a win on the grass grand prix field at Wesley Clover Parks in Ottawa, ON.

Soleau-Millar and Hoolie Hoo, the 12-year-old Dutch Warmblood mare owned by C. F. Farms, bested a field of 32 entries with a double clear effort in a winning jump-off time of 43.99 seconds.  The 1.35m Open Jumpers were next, and this time it was Jonathon riding Caprice, a nine-year-old Dutch Warmblood mare owned by Peter Edgar, who produced the winning round to beat out 24 other competitors.

“It’s been a real Team Millar day!” said Soleau-Millar of the back-to-back victories, which were immediately followed by a win for their student, Adam Rittenberg, riding Alazan in the 1.30m Junior/Amateur competition.

Married in December, Jonathon and Soleau-Millar are no strangers to traveling and competing together, most often alongside Ian and Amy.

“We’re on the road a lot, and it’s nice to be able to travel with the whole group,” said Jonathon.  “We’re really fortunate that way.  The horses have all been great, so that always makes showing together even more special.”

Jonathon continued, “We’re also fortunate that we all have a common goal.  We all want to be successful ourselves, but we also want each other to be successful.  Hopefully at the end of the day, at least one of us has had a good day!”

Millar Brooke Farm has brought a total of 30 horses from its home base in Perth, ON to the Ottawa International Horse Show.  Sanctioned as a CSI2* by the International Equestrian Federation (FEI), riders competing in the feature events are able to earn valuable World Rider Ranking points.

“Having FEI competition in our backyard is amazing,” said Soleau-Millar.  “We couldn’t ask for a better venue, and the prize money is outstanding.  I ride a lot of the young horses and bring them along, and it’s hard to make your way without wonderful shows like this one that have such strong support and money behind them.”

Having a world-class competition situated only 45 minutes from home is a big draw for the Millar family.

“The field is unbelievable to ride in, and the improvements made every year are just outstanding,” Soleau-Millar said.  “The schedule is wonderful, and everything is competitor and horse friendly.  It’s really nice to have a place that’s close to home and at a venue that’s so beautiful.”

Spectators at the CSI2* Ottawa International Horse Show can expect to see the Millar family in action throughout the week.  Featured events include the $35,000 CSI2* Open Welcome on Friday, the $10,000 Modified Grand Prix on Saturday, and the $100,000 CSI2* Classic on Sunday, all beginning at 2 p.m.