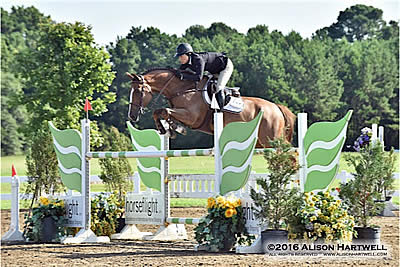 Ten advanced to the second round and only seven turned in double clear rounds over a course designed by Allen Rheinheimer of Zionsville, Indiana, who set the first round time allowed of 81 seconds and second round time of 43 seconds.

Hayley Iannotti of Wellington, Florida, in the irons of Sandalwood’s Vanda Gabbana, was the first to go, turning in a fault free effort in a time of 79.960 seconds. Their second round was also clear and their time of 41.764 seconds set the new time to beat.

Doug Payne of Aiken, South Carolina and Debi Crowley’s Vandiver followed several rounds later and turned in clear first round in a time of 74.167 seconds and bested Vanda Gabbana’s time with their own fault free 38.489 seconds, taking the lead.

Paul Macrae of Alpharetta, Georgia and Maartin Huygins’ Corini followed with the next clear first round in a time of 77.112 seconds. They also turned in a fault free second round in a time of 38.145 which took the lead and set the new time to beat.

Christoph Schroeder and his own Heliante Ter Wilgen, winners of last week’s $35,000 Devoucoux Grand Prix, followed with the next clear first round in a time of 77.160 seconds. However, their second round in a time of 37.778 seconds with eight jump faults would keep the lead with Macrae and leave them in finishing in ninth place overall.

Payne returned to the arena, this time in the irons of Courtney Young Alston’s Botanja, for a clear first round effort in a time of 75.536 seconds. Although their second round was the fastest thus far in a time of 32.802 seconds, two rails for a total of eight jump faults would have them finish in eighth overall.

Amanda Forte of Glenview, Pennsylvania and Cerulean Stables, LLC’s MHS Automatic, second place finishers in last week’s $35,000 Devoucoux Grand Prix, followed in the order and turned in double clear first and second rounds in times of 76.241 seconds and 34.297 seconds, taking the lead and setting the new time to beat!

Schroeder followed Forte, this time with Nuvolari Holdings, LLC’s Commissario. The pair turned in double clear rounds in times of 77.447 seconds and 37.238 seconds which would keep Forte in the lead and have them finish in fourth place overall.

Missy Clark’s Baluga, ridden by Michael Kocher of Tryon, North Carolina, was the next horse and rider team to turn in double clear rounds in times of 78.004 seconds and 36.796 seconds, which would earn them third place honors overall.

“Automatic went great!” commented Forte. “We showed last winter in Gulfport and then he injured himself in turnout so he’s been on a break,” she said. “He’s just coming back and we’re getting to know each other again,” she added. “He’s very talented and I’m really happy with how he is progressing,” she said.