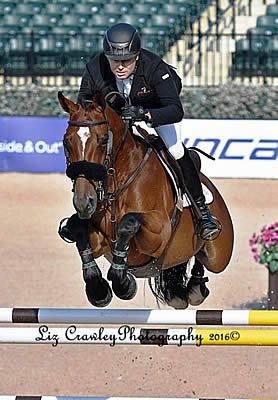 Wordley and Famoso D Ive Z started off this season looking to gain experience together at the FEI levels and establish a strong relationship that would make them competitive at the top tiers of the sport. The 2007 Belgian Warmblood gelding (For Pleasure x Chin Chin) owned by Sky Group & Wordley, has greatly surpassed the expectations of Wordley and their goals coming into this season, as he now looks to be top contender at the international level.

Catsy Cruz (MEX) will design this week’s FEI tracks and competition saw 27 entries, while 10 combinations moved forward to the jump-off round.

“I thought this was a good course today. I always like Catsy’s [Cruz] courses and they’re always very well built,” said Wordley. “The numbers were perfect too. We had ten clean and that was about right for the class.”

“It flowed very well and there were some tough questions that created some challenges out there. It was easy to pull a rail down, but it also wasn’t tremendously big,” he added.

The pair went late in the jump-off order, allowing Wordley to analyze the course, as well as previous competitors before he entered the ring. Noticing that multiple combinations were exiting the difficult one stride combination with a rail, Wordley turned his focus to that specific component of the course.

“As I was watching I noticed that some scopey horses had the back rail down. My plan going into it was to do seven from the oxer around to the double and I changed that after I saw the few pairs have that rail down,” he detailed. “I wanted to get ahead in there so I did eight strides instead.”

Their victory marked Wordley’s seventh win at the facility this season as he currently has four incredibly talented mounts representing New Zealand at the international level.

“There’s no secret really. I just have some incredible horses. I’ve had them now for just about a year and I think that it takes about that long to get to know them and train them,” commented Wordley. “It takes you that long to be able to get to do everything you want with them and I can’t say enough about the team of horses we have here.”

With three horses entered this week in FEI, Wordley will look to continue with the impressive consistency he has showcased this season, as well as improve on what seemed to be an off outing for his top mount Casper in the $216,000 Hollow Creek Farm CSI 4* Grand Prix. Wordley also plans to return to the venue during the 2016 Tryon Fall Series to contest the FEI CSI 5* with all three mounts.

“We brought Casper out today to give him a good go after last week. He jumped great and was confident today so we’ll probably do the class on Saturday this week,” said Wordley. “We’ll definitely be back in the fall for the FEI classes and I hope we’ll have three in the FEI CSI 5*.”

Competition at TIEC continues throughout the week, featuring the hunter and jumper disciplines, while FEI competition will resume Thursday in the George H. Morris Arena with the $35,000 1.50m Suncast® Welcome beginning at 8:00 a.m. For more information on TIEC, please visit www.tryon.com.