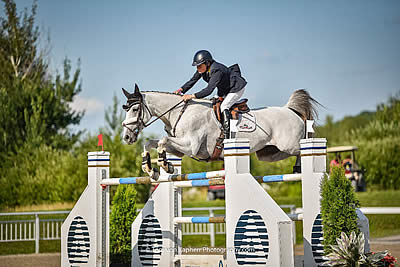 Bromont, July 25, 2019 – American rider Leslie Howard and her mount Donna Speciale did not give their fellow competitors a chance at the opening CSI3* event presented by the town of Bromont at the Olympic Equestrian Park.

Welcome to Bromont
29 horse-rider pairs took part in the opening event sanctioned by the Fédération Équestre Internationale (FEI). The course by FEI4* designer Leopoldo Palacios (VEN) was a real challenge: with 12 obstacles for 15 efforts, including three double combinations, as well as a series of technical turns, where only 8 pairs made it to the jump-off.

The fastest in the first round, Andrew Kocher, who made it to the second round with both mounts, gets 8 penalty points with Abelone O.T. Lowlands Z, his eight-year-old Zangersheide mare, giving Daniel Coyle and Farrel the chance to establish the time to beat with a clear round in 37.63 seconds. The following pairs are unable to do better. Leslie Burr Howard then comes in the ring with Donna Speciale, an eleven-year-old KWPN mare, owned by Laure Sudreau-Rippe & Peter Howard. An experienced rider known for her speed, she rushes forward with her mount. Manoeuvring around the turns with skills and overcoming the course’s challenges, Leslie Howard and Donna Speciale take the lead with a perfect round in an unbelievably fast time of 34.72 seconds, leaving their competitors no room to manoeuvre.

Events throughout the week
The International Bromont offers classes for all levels until Sunday, while Fédération Équestre Internationale (FEI) sanctioned events will take place on Friday and Sunday. The show will present its second week from July 31 until August 4, 2019.