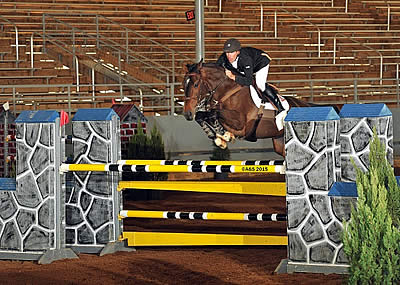 Andy Kocher won the $10,000 Jumper Classic Week I to kick off a very successful circuit.

The Gulf Coast Winter Classics in Pensacola closed out its successful three week circuit Sunday after crowning the Circuit Champions.

The circuit kicked off with a $10,000 Jumper Classic and Weeks II and III followed with weekly $5,000 Horseflight Open Welcome classes as well as the Week II $25,000 Nutrena Grand Prix and the season finale, the $25,000 EMO Grand Prix.

The Gulf Coast Winter Classics in Pensacola closed with the second annual Wild West Show which showcased top entertainment for the crowds and featured barrel racing, clowns and world-renowned Loop Rawlings! Loop Rawlings is the international roping and gun twirling sensation who has performed with the Cirque Du Soleil as well as on television.

As a special bonus, the crowd was entertained by the first annual Donkey Races which featured the top riders as jockeys. Even Kocher, who won every grand prix, found the tables turned when he and his donkey mount came in last. “Apparently donkeys respond to different signals,” he commented.

The Circuit Champions were crowned on Sunday as the exclamation point to a wonderful three weeks of shows on Florida’s Gulf Coast. “It is always such a pleasure to present the Circuit Champions at our shows,” commented Bob Bell, President of the Gulf Coast and Classic Companies. “The horses, trainers and riders put so much effort into our sport and it feels great to recognize them for their championship achievements,” he said.

“We would like to thank our sponsors, the cast of the Wild West Show and Purdue Productions and the families, trainers, riders, friends and especially the horses who came to show with us in Pensacola,” said Bell. “We look forward to seeing you here again next year and hope you will join us in Gulfport,” he added.