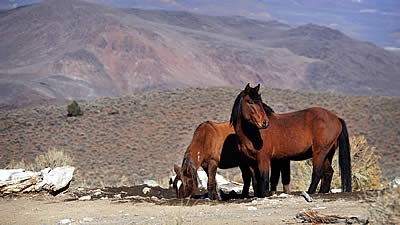 A planned roundup of wild horses in the Pine Nut Mountains has been put on hold after wild horse advocates filed a lawsuit alleging the plan violates federal law and would subject horses to the damaging effects of a fertility-control drug.

The horse gather, originally planned to begin Saturday in the hills south of Dayton and last up to 10 days, has been put off to late February at the soonest, Bureau of Land Management spokeswoman Lisa Ross said Tuesday.

“The BLM abruptly made a decision in December of 2014 to round-up, permanently remove and forcibly administer fertility-control drugs on our wild horses,” said Jenni Barnes, attorney for the Friends of Animals wildlife law program.

“BLM violated the law by excluding the public from this decision making and completely failing to consider its impacts,” Barnes said. “FOA and Protect Mustangs have filed this lawsuit to ensure that BLM does not destroy Nevada’s last remaining wild horses.”

Ross had no comment on the lawsuit. She said the BLM will likely proceed with other wild horse gathers planned near Tonopah and Battle Mountain in the coming weeks and possibly conduct the Pine Nut gather late in February.

A population inventory conducted by BLM last August concluded the wild horse population south of Dayton and east of Carson City and Gardnerville documented 332 horses, far in excess of the “appropriate management level” of between 119 and 179 animals.

An overpopulation of horses in the area has damaged the range, including valuable sage grouse habitat, and reduced availability of native forage grasses needed to support a healthy horse population, BLM officials said.

“They are considerably over the high end (in population) and have been for two or three years,” John Neill, incident commander for the planned gather, said Monday. “Once animals grow over that upper end, those animals are excess animals and BLM is responsible to remove them.”

The BLM planned to gather the 332 horses, permanently removing about 200. Of the 132 released back to the range, about 66 mares would receive a 22-month treatment of the Porcine Zona Pellucida immunocontraceptive vaccine, or PZP, to prevent future reproduction.

The lawsuit contends the BLM failed to prepare an environmental assessment for the roundup as required as the National Environmental Policy Act and failed to provide adequate public notice of its plans. It also alleges the government has ignored studies indicating the fertility control drug PZP alters horse behavior and “can have significant and lasting effects on the birthing cycle” of wild horses.

Developments come after two members of Friends of Animals were escorted by sheriff’s deputies from a BLM meeting at a Minden hotel-casino last week. They were there to protest the BLM’s handling of wild horses during a workshop on a draft long-range management plan for the agency’s Carson City District, which includes the area targeted for the Pine Nut roundup.

(Cross-posted for educational purposes only)