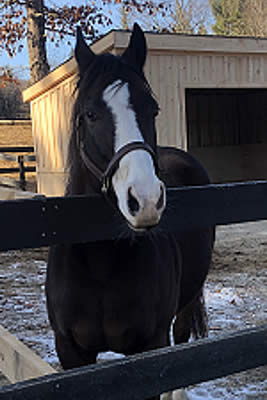 Next Question, known as Q, at Old Friends at Cabin Creek in New York.

GREENFIELD CENTER, NY – JANUARY 17, 2020 – Grade I winner Next Question was euthanized on January 16 at Old Friends at Cabin Creek due to complications from a paddock accident. He was 12.

Racing for Three Diamonds Farm and trainer Michael Trombetta, Next Question’s greatest accomplishment came in the Grade 1 Nearctic Stakes at Woodbine Racetrack, where he upset the field at 16-1. Other accolades include a placing in the 2013 Around the Cape Stakes at Belmont Park, and participation in the 2012 Breeders’ Cup Turf Sprint at Santa Anita Park.

“Q was a kind, sweet horse who was well loved by everyone who cared for him throughout his life,” said Old Friends at Cabin Creek owner and manager JoAnn Pepper. “We are heartbroken to carry on without him, and grateful to Three Diamonds Farm for allowing us to have this time with Q.”