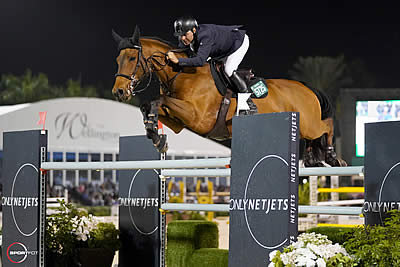 Clears were hard to come by in the opening round set by course designer Oscar Soberon (MEX). A tight time allowed was first bested by Lillie Keenan (USA) riding Fasther, a mount that lived up to its name and led the way. Keenan was joined by five more riders, setting the stage for a six-horse speed duel over the second round’s short course.

Rails fell for both Keenan and fellow U.S. rider Todd Minikus, riding Calvalou, before U.S. team Olympic gold medalist McLain Ward set the pace on a clear round in 43.60 seconds aboard Jet Blue. His time, however, was quickly beat when Lambre and Cetano van Aspergem Z stopped the clock in 40.22 seconds.

“This horse is naturally fast,” said Lambre of the horse he has been competing internationally for almost three years. “I tried to not lose my mind, and I tried to keep a good, nice rhythm. The horse, at this level, can be very fast, and tonight it was.”

The Equiline Amateur-Owner Hunter 3’3” 36 & Over division came to an end on Saturday with Becky Gochman and Last Man Darling earning the title of champion. Gochman piloted Last Man Darling, owned by Gochman Sport Horses LLC, to two firsts, a third, a fifth, and a sixth-place ribbon.

This championship was an extra-special one for Gochman, of Wellington, FL. This season is the mare’s return to the show ring after an injury sidelined them for two years. This was the pair’s second week showing again. “Last week she was a little excited, and I was a little nervous; this week we both calmed down and took a breath,” Gochman described.

Last Man Darling has been in the Gochman family for close to five years. “She started off with my girls, Sophie and Mimi, in the junior hunters, and then I began to show her successfully in the 3’3” amateur-owners,” Gochman explained.