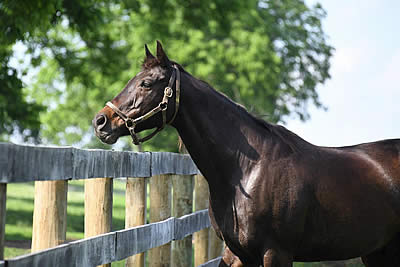 The 20-year-old son of Grand Slam had been pensioned at Old Friends, the Thoroughbred Retirement facility based in Georgetown, KY, since 2016. Old Friends founder and President Michael Blowen made the announcement of his passing this morning.

Co-owned by Padua Stables and John and Joseph Iracane, Cajun Beat proved himself a consistent winner in his three seasons on the track. He broke his maiden at Calder in only his second start as a two-year-old, and captured his first stakes early in his three-year-old year, winning the Hallandale Beach Stakes at Gulfstream. He followed that with a win in the Grade 3 Kentucky Cup Sprint at Turfway.

A month later Cajun Beat entered the starting gate for the 2003 Grade 1 Breeders’ Cup Sprint at Santa Anita at odds of nearly 23-1, but just over a minute later he put himself, trainer Steve Margolis, and jockey Cornelio Velasquez in the limelight by cruising to a 2¼ length victory.

The following year Cajun Beat earned two more graded wins — including a victory on the grass in the Hollywood Turf Express at Hollywood Park for new trainer Bobby Frankel — before retiring in 2005 with Padua Stables.

He joined Old Friends in 2016 along with his closest friend, Padua’s Pride.

“He was a lovely horse, a real champion,” said Satish Sanan of Padua Stables. “With all of the horses we’ve had, he was one of our favorites — he was my wife’s favorite. He didn’t show much talent until we gelded him, and then he became a hell of a sprinter. He gave us a lot of thrills. We were very grateful to Old Friends for taking he and Padua.”

“Cajun Beat was as sweet as he was speedy,” said Old Friends’ Blowen. “Yesterday, after his unexpected death, his long-time pal, Padua’s Pride, stood over the body, nudging him, as if he was trying to get him up. All of this with the setting sun in the background. He earned every bit of it… to die with the dignity that the rest of us can only hope for.”