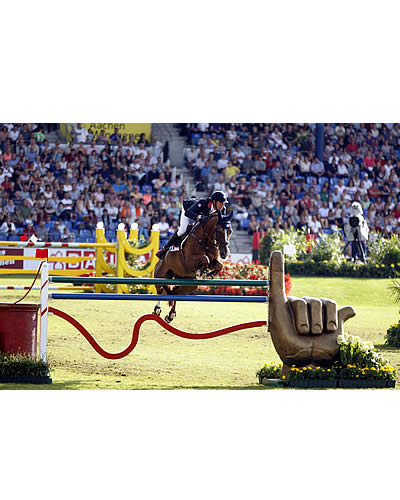 Kevin Staut and Reveur de Hurtebise HDC produced the third clear round that promoted France to the top of the leaderboard in today’s first round of the team final competition at the FEI European Jumping Championships 2015 in Aachen, Germany. (FEI/Dirk Caremans)

Aachen (GER), 20 August 2015 – Team France jumped into the lead in the first round of the team final at the FEI European Jumping Championships 2015 in Aachen, Germany this afternoon. On a day when clear rounds were hard to get, overnight individual leader Penelope Leprevost produced yet another foot-perfect performance when first in for the French side. And when team-mates Simon Delestre and Kevin Staut did likewise, her side stood firm on the score they carried through from yesterday’s opening speed competition to move up from second spot to the top of the leaderboard.

The Dutch demonstrated exactly why they are the reigning world champions when also posting three fault-free runs to move up from overnight fifth to silver medal spot. And now that they are in a position of strength they look really threatening. Meanwhile, the first-day leaders from Germany slipped to third, their decline halted, however, by two brilliant runs from Ludger Beerbaum and Daniel Deusser.

With only the top ten teams eligible for tomorrow’s second round medal-decider, today’s competition was a fierce one, and the British dropped one place to fourth ahead of Ukraine in fifth spot. The Swiss really rose to the occasion, rocketing up from 13th to sixth when they were the only others to add nothing to their scoreline. Spain, Denmark, Ireland and Sweden have also made the cut.

Emotions have been high all week, with Olympic qualification also hanging in the balance. As it stands this evening the last three places on offer to European teams are in the hands of the British, Swiss and Spanish. But the Danes and the Irish are hot on their heels and it’s still all to play for in tomorrow’s closing stages.

Frank Rothenberger presented another great track today, testing riders of all levels. Israeli individual, Danielle Goldstein, was first to find the key with her mare Carisma when going sixth of the 10 individuals who got the class underway. And when the next clear was posted by Romain Duguet with Quorida de Treho, the Swiss began their upward curve. These championships have turned up some interesting new partnerships including Romania’s Andy Candin and his very sweet grey gelding Caruso who competes without a noseband and seems to really want to please his rider. And Russia’s Maria Madenova and Natalia Belova were eye-catchers with their two lovely horses, Kleiner Onkel and Upset des Cinq Chenes.

The triple combination at fence five claimed plenty of victims, while the bending line from the vertical at nine to the oxer at 10 and the following vertical at eleven needed to be carefully handled. However, two of the most influential obstacles on the course were the penultimate vertical, jumped off a roll-back, and the final double of massive oxers. The latter produced more than a few moments of drama, including a fall for Portugal’s Luis Sabino Goncalves when his gelding Filou Imperio Egipcio, who had been going beautifully until then, suddenly threw in a stop at the second element.

A few horses seemed to miscalculate the two-stride distance here, but the most spectacular of all was Ben Maher’s mare Diva who picked up after one stride and landed in the middle of the second element. It wasn’t the perfect start to the British day, but both horse and rider left the arena unscathed and with another otherwise clean sheet. A 12-fault result from Jessica Mendoza and Spirit T put Maher’s team-mates under pressure, but then Joe Clee, lying individually third after a spectacular first day with Utamaro D’Ecaussines, produced another fabulous run. There was no room for error as last-line rider Michael Whitaker he set off with the stallion Cassionato, and his reaction when retrieving the situation with an amazing ride epitomised the spirit and passion that has been rippling through the competition arena this week.

After leaving the arena, he said, “I’ve got a lot of confidence now in my horse; I didn’t know what to expect; he’s never been in this ring, and he’s never been under that kind of pressure, so I didn’t know how he would react and he actually rose to the occasion,” he said proudly. And then Germany’s Ludger Beerbaum, another much-respected elder statesmen of the sport, came up and shook his hand. “Great job,” he said. “I hope you make it through to the Olympics,” and Michael Whitaker burst into tears.

The 55-year-old veteran admitted that he had been feeling the pressure – “If I’d come out and messed it up, that was it actually; we wouldn’t be going to the Olympics but now we’re still fighting tomorrow – even for a medal,” he explained.

Storming up the leaderboard

Meanwhile, the Dutch were storming up the leaderboard with clears from Dubbeldam and his world championships winning ride SFN Zenith, Jur Vrieling with VDL Zirocco Blue and Gerco Schroder with Glock’s Cognac Champblanc. But the host nation lost their grip with single mistakes from their first two riders, Meredith Michaels-Beerbaum (Fibonacci) and Christian Ahlmann (Taloubet). Ludger Beerbaum was amazing yesterday with Chiara, and today he rode another stunning round with Chiara. “We need another good round; otherwise we are going down the ladder,” he said after coming out of the ring. But Daniel Deusser’s clear with Cornet d’Amour ensured Team Germany is still very much in contention going into tomorrow’s final team test.

The individual scoreboard hasn’t changed at the top end, with Leprevost still in pole position ahead of Beerbaum in second and Britain’s Clee in third. “My mare was just a dream today; he was so easy to ride, scopey, careful – everything was perfect for me!” the Frenchwoman said. But she knows that there is still plenty more to do before the medals are awarded. “Yes we are in the lead now, but we have one more difficult day tomorrow,” she pointed out.

10 of the 92 were competing as individuals.

France heads the team standings going into tomorrow’s final round of the team competition with Netherlands in second and Germany in third.

On the individual leaderboard Penelope Leprevost FRA, Ludger Beerbaum GER and Joe Clee GBR have remained in the top three places but Belgium’s Gregory Wathelet has moved up to fourth ahead of Spain’s Sergio Alvarez Moya in fifth and Ukraine’s Cassio Rivetti in sixth.

Michael Whitaker GBR (about today’s course): “You couldn’t get it wrong; you had to ride every fence, think about the lines – even the last fence, the problems it caused. You had to get it all right. Joe was brilliant and Ben was brilliant – what the mare (Maher’s Diva) did was absolutely nothing to do with Ben. She just took it in her own hands to take off and Ben did unbelievable to stay on! He deserves a medal actually!”

Ludger Beerbaum GER: “Today is the team competition, and that’s what counts. I’m really pleased with her (Chiara) performance; it was harmonious, a really nice easy-going round.”

Jessica Sprunger SUI: “We knew it was like our final day today; otherwise the championship was over for us, so we did the best we could. We made three clear rounds and now we have to see how it is at the end of the day. After yesterday everyone was disappointed because the horses are in good shape, but yesterday not even one pair could bring a top result home. So it was difficult after yesterday, but we tried to put that aside and just focus on jumping clear, whatever it would take; we were fighting. I was very nervous – normally I’m nervous walking the course or before I go in, but today I was very nervous riding. We have fought our way back, and we won’t give up until the end!”

Jeroen Dubbeldam NED: “I didn’t have to do too much today because my horse did everything for me. Normally in a triple combination on two strides he comes out too fast, but he didn’t. The only thing I have to do now is not get too easy for tomorrow; I have to keep sharp.”