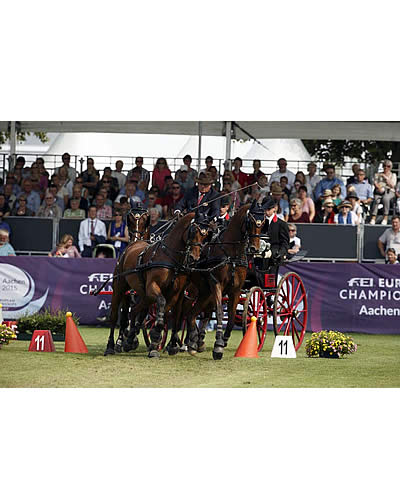 Tensions rose in tandem with the temperatures today during the exciting cones phase, with double world champion Felix Marie Brasseur from Belgium first of the 36 competitors to drive a double clear round, much to the pleasure of the enthusiastic spectators and Brasseur’s team members.

German level 4 Course Designer Dr Wolfgang Asendorf had laid out a nice but selective course for the drivers. In the end, eight drivers drove the course within the time allowed and only Brasseur and Dobrovitz managed a clear round. “I am very pleased,” said Asendorf. “One part of the course was still a bit too tight in my opinion, but if I had changed that we would have had to change the time allowed as well. The time allowed was doable, but Felix really showed how to drive a double clear.”

The FEI European Driving Championships for Four-in-Hand will be the last international competition for the Belgian legend Felix-Marie Brasseur, who finished fourth today. “Unfortunately, I do not have the necessary sponsors to continue the sport at this level, but my horses were super today, and they showed the same quality as during the dressage. I gave everything I had today. I wanted to start off clean and half way through the course I noticed that I was in time, so I continued like I did.”

József Dobrovitz proved to be a true horseman, driving his team of KWPN and Lipizzaner horses together for the first time as a four-in-hand. “For the leader horses it is actually their first competition in the four-in-hand. They have been driven in a pair before, but never in a team. I have practiced a lot with these horses at home and this has paid off today!” he said.

“At obstacle eight I thought I had a ball down. Luckily this was not the case, and after that I became ever more eager and concentrated. I am looking forward to tomorrow’s marathon. I will try to win around three seconds in each obstacle. I will really go for it!”

Dobrovitz is now second in the overall standings, nine penalty points behind IJsbrand Chardon, who has created a comfortable lead.

One point for podium

The top four in the team results has remained unchanged, but thanks to the strong performances of IJsbrand Chardon and Koos de Ronde, the defending European champion, the Netherlands are over 20 penalty points ahead of second-placed Hungary.

Belgium is still third, but Germany is less than one point behind a podium place. Both Michael Brauchle and Georg von Stein performed extremely well in the cones, and with three excellent marathon drivers in the team Germany will for sure ‘attack’ in this final phase of the European Championships, which will start at 11.05 tomorrow (22 August).