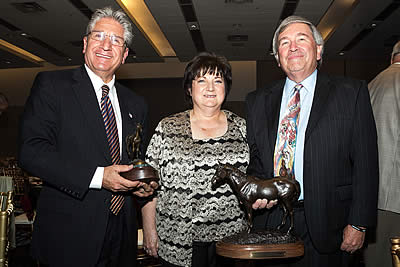 Jack Knowlton of Sackatoga Stable and Assemblyman Jim Tedisco were honored for their work to ban horse slaughter and dedication to the protection of all equines. Saratoga’s Julie and Sonny Bonacio of Bonacio Construction presented Knowlton with the 2013 Safe Home Equine Protection Award. Assemblyman Tedisco was honored with the 2013 Ellen and Herbert Moelis Equine Savior Award, presented by News10’s popular animal-loving Chief Meteorologist and host of “The Pet Connection” Steve Caporizzo and Herbert and Ellen Moelis, founders of Thoroughbred Charities of America.

“Our industry seems to be missing two words. Those words are ‘owner responsibility,’” said Herbert Moelis while presenting the award to Assemblyman Tedisco. “Fortunately we have two words added to our industry also. Those are ‘Equine Advocates.’”

“We are thankful to everyone who helped make this year’s event so successful,” said Equine Advocates Founder and President Susan Wagner. “This was our twelfth annual benefit dinner and the twelfth one held in Saratoga Springs. We continue to host the event here each year because the town centers around horses, reflecting our shared dedication to and reverence of these inspirational animals.”

About Equine Advocates: Equine Advocates is a national, non-profit equine protection organization and sanctuary based in Chatham, NY.  Founded in 1996, Equine Advocates has helped and rescued thousands of equines from slaughter, abuse and neglect. The sanctuary is home to eighty-three remarkable equines, including horses, ponies, donkeys and mules. More information and the organization’s Open Day Schedule for visits can be found at www.equineadvocates.org.