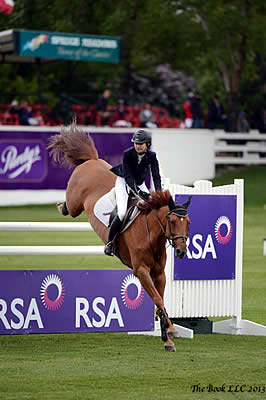 Abigail McArdle and Cosma 20. Photos By: Parker/Russell – The Book LLC.

Most recently, McArdle competed at the Dinard CSI 3* International Horse Show, held July 24-28 in France. McArdle captured two winning awards with Cosma 20. The first was during Saturday’s 1.45m Open Jumper Speed class, where they beat 42 entries with the fastest clear round by almost two seconds. They then went on to win Sunday’s 1.40m Open Jumper Speed class as well to culminate an excellent weekend.

“Everything was a little bit bigger in Dinard,” explained McArdle. “Overseas there is a lot of focus on speed classes. I’ve been trying to move up with Cosma, and that is one of the bigger 1.45m classes that I have jumped.”

Their win in Dinard came just one week after the Chantilly Global Champions Tour event where McArdle and Cosma once again led the victory gallop, this time in the 1.40m Open Jumpers. Out of 87 entries, 12 advanced to the jump-off and six riders were able to produce a second clear effort, but none would be as fast as McArdle. She shot through the timers in 36.86 seconds, almost two seconds faster than the previous leader to capture the winning honors.

To prepare to compete in Europe, McArdle traveled to Calgary, Alberta to show at the legendary Spruce Meadows. She kicked things off by winning the $5,000 Friends of the Meadow 1.45m Welcome Stake during the ‘Continental’ Tournament.

“The first week of Spruce we did the Open 1.40m division, and we won two days, so we jumped 1.45m for the rest of the weeks,” stated McArdle. “It was my first real FEI win against the professional riders. They were hard courses, and the jumps were big. It was a super experience, and it gave me a lot of confidence going to Europe.”

During the four weeks of Spruce Meadows, McArdle racked up 10 first place finishes in the FEI divisions between her two mounts Cosma 20 and Bravoman. The finale came on July 4, during the North American’ Tournament. Competing sixth in the order of 23 entries, McArdle and Cosma 20 captured and held on to an early lead during the $33,000 Zoetis Horse Health Care Cup 1.45m Speed Derby.

“Cosma 20 is a great derby horse,” acknowledged McArdle. “We were lucky to be able to school all kinds of derby fences at the Kessler’s farm in Kentucky before we came, and I think that was a huge advantage. My horse had seen everything, jumped the grob and jumped off the bank. That class was lots of fun, and it was one of those courses with 20 jumps, so you have to pick where you are going to gallop between fences. We had a really wonderful Spruce Meadows!”

McArdle excelled in the High Junior Jumpers, but rather than move to the High Amateur-Owner Jumpers, she pushed herself to begin competing against the professional riders. “The goal is always to push yourself,” she stated. “We did so well last year and then our test was when we got to Spruce: can we still win in the Open 1.40m, where the courses are harder and the competition is tougher, and when we did win we decided to move up.”

Over the last two years, McArdle has developed a special bond with Cosma 20 that helps her be so successful. “It has been moving up for me and it’s been moving up for Cosma,” she noted. “Every time you move up you learn more about your horse, so it’s been a great experience for me. She’s such a great horse, and she is so careful.  Anytime you have a careful horse, it’s about being able to figure out how to let them jump clean as the jumps go up. I have a lot of confidence in her to continue winning in the future.”

McArdle’s legendary trainer Katie Prudent is also confident about the pair’s future. “Cosma and Abby are a match made in heaven,” commented Prudent. “She just rides the mare so beautifully, and it wouldn’t be a horse for just anyone. Cosma is extremely careful, and Abby does a wonderful job with her because Abby has a great eye and never ever misses and never puts a horse in a position where it might not have confidence. Because of that, she gives the horse tremendous confidence. They are just a winning team.”

Prudent added, “Abby rides so well, and she has aspirations to be on the team one day. I love to give the kids an opportunity to go to a higher level. I don’t see any end in sight.”

Next week, McArdle will conclude her European tour by competing at the Valkenswaard Global Champions Tour before staring her freshman year at the University of Miami. McArdle will continue to focus on competing and advancing with Cosma 20 next winter during the 2014 Winter Equestrian Festival.