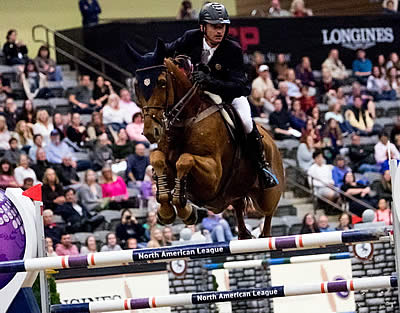 In May, RMF Echo was about to be sold out of Lynch’s stables, but owners Monica and Frank McCourt of Rushy Marsh Farm stepped up to purchase the chestnut so that he could stay with Lynch. That proved a worthwhile decision when the duo prevailed over a world-class field which included three of the top 25 riders on the Longines World Rankings.

“The horse ended up in our stable this winter, and I was actually short a horse,” Lynch recalled. “Then, I started jumping him in some shows at the beginning of the year, and he started progressing to a better horse. He was sold after [CSI 5* Versailles (FRA)], and I was very, very lucky that Rushy Marsh stepped in overnight and secured me the horse, which I’m incredibly grateful for. It was incredible. I’m very, very lucky to have him.”

“Echo’s been unlucky a few times this year, when he’s been beaten at the post. He really deserved this win tonight.” — Denis Lynch (Ireland)

Lynch and “Echo” were one of nine horse-and-rider pairs to advance to the jump-off. They blazed through Michel Vaillancourt’s (CAN) shortened track, stopping the timers in 36.16 seconds and overtaking the lead, which up to that point had been held by Beat Mändli (SUI) and Dsarie, who were winners just last week at the Longines FEI World Cup™ Jumping Washington (USA). Mändli ultimately finished third with a time of 37.80 seconds, while Lauren Tisbo (USA) and Coriandolo di Ribano slotted into second, just missing the top spot when crossing the timers in 36.52 seconds.

“I went as quickly as I could,” Lynch said. “Echo is a naturally very, very quick horse. He’s been unlucky a few times this year, when he’s been beaten at the post. I think there were three or four grand prix where he finished second. I think he really deserved it tonight.”