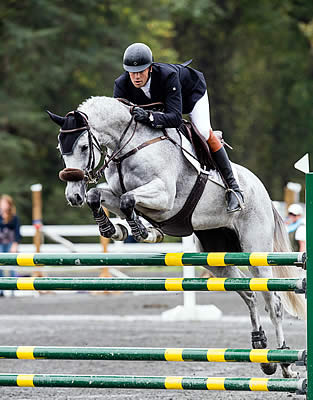 Fair Hill, Md. – The show jumping phase proved influential for CCI3* competitors on Sunday at the 2017 The Dutta Corp. Fair Hill International Three-Day Event, with Will Coleman and Tight Lines claiming the title of The Dutta Corp./USEF CCI3* Eventing National Champions. Tamra Smith and Sunsprite Syrius remained unaffected by the challenging show jumping phase to close out a start-to-finish win of the CCI2* division.

In the CCI3*, the leaderboard shuffled to put Canada’s Selena O’Hanlon and Foxwood High on top as the winning pair of the 2017 The Dutta Corp. Fair Hill International Three-Day Event. It was a rollercoaster weekend for O’Hanlon (Ontario, Canada), as she bounced from first to second and back on top again with Foxwood High, a 14-year-old Canadian Sport Horse gelding owned by John and Judy Rumble. Ultimately, the CCI3* win and a $15,000 prize were hers for the taking after she added three deliberate time penalties in Sunday’s show jumping to finish on a score of 44.0.

Coleman (Charlottesville, Va.) and Tight Lines were crowned The Dutta Corp./USEF CCI3* National Eventing Champions and second overall at the 2017 The Dutta Corp. Fair Hill International Three-Day Event after a faultless show jumping round left them on their dressage score (46.3) as the highest placed American pair. As the national champion, Coleman will also receive one free, round-trip flight to Europe, for one horse from The Dutta Corp.

“He was magic yesterday on the cross-country. I was thrilled with how he ran. He made it feel like it was well within his capabilities, and today he just tried his heart out,” Coleman said of The Conair Syndicate’s 10-year-old Thoroughbred gelding. “I think the horse’s biggest attribute is that he just gives 100% all of the time. He’s not the simplest, but he really tries. As long as you can harness that the right way, you can do some good things. We’ll just try to reproduce it now over and over again.”

A clear round catapulted Boyd Martin (Cochranville, Pa.) and Christine Turner’s 10-year-old Trakehner gelding Tsetserleg to third place in the CCI3* for The Dutta Corp./USEF CCI3* reserve champion title. A score of 46.1 in the dressage and 1.2 time penalties on cross-country gave them a final result of 47.3.

“He’s a newer horse for me,” Martin commented on his talented partner. “He just doesn’t wow you at home, but when you get to a competition, this horse all of the sudden grows to about 17.2, he jumps as high as you want to jump, and moves like Totilas. We saw that this weekend at Fair Hill.”

“I’m thrilled. He was perfect in every phase, and I couldn’t have asked him to be better. He show jumped today like a million bucks,” Smith said proudly.

For Smith, a win like this means all the more for the horse’s owners, Pamela Duffy and Donald Trotter of Sunsprite Warmbloods. “The owners have a fairly small to medium breeding farm in southern California, and Pam [Duffy] is very diligent about breeding horses and what horses she acquires for the sport,” explained Smith.  “I’m just really happy for them. It’s been kind of a long road to get here, so I’m thrilled for them.”

Coleman and Off The Record moved nimbly around Sally Ike’s winding show jumping track to finish in second place in The Dutta Corp./USEF CCI2* Eventing National Championship. The Off The Record Syndicate’s eight-year-old Irish Sport Horse gelding avoided jump penalties throughout the weekend for a final result of 49.8.

“Anytime you finish a three-day event on your dressage score, I think it’s a major accomplishment,” Coleman said proudly. “This horse has done it twice this year, which I’m really proud of. There are some things we will try to improve on over the winter. He’s been consistent this year, and that’s something we can hang our hat on.”

Matthew Flynn (Reddick, Fla.) and Get Lucky, a nine-year-old Dutch Warmblood gelding owned by Flynn Sporthorses, steadily climbed the leaderboard through all three phases, ending the competition in third. Only 0.4 cross-country time penalties marred their finishing result of 50.4. Get Lucky was also awarded the Best Presentation Award.

“I was really happy with him in all three phases,” said Flynn. “I was disappointed to be one second over [the time on cross-country], but such is life. For him, I’m thrilled. It’s his second two-star event and he’s been third here before, so it was nice to repeat it.”

The John H. Fritz Trophy was awarded to Sophia Click as the highest-placed Young Rider in the CCI2* division. Nina and Tim Gardner’s FE Lifestyle, a seven-year-old Warmblood gelding, earned the USEF National Young Horse Championship title for six- and seven-year-old horses. The Small But Mighty Award was given to Colleen Rutledge’s (Frederick, Md.) 11-year-old Irish Sport Horse mare Uno for being the smallest equine to complete the CCI2*.