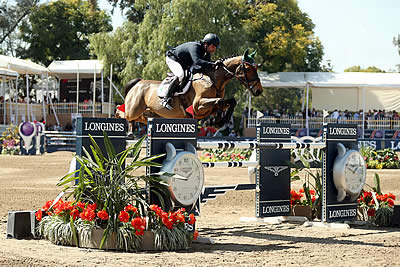 Guadalajara, Mexico, 29 January 2017 – The Pasquel family had three opportunities to claim the win in the penultimate event in the Longines FEI World Cup™ Jumping 2016/2017 North American League Western Sub-League at Guadalajara CSI4*-W with the three brothers Francisco, Patricio, and Gerardo entered in the 28-rider field. And in the end, the odds worked in their favor as it was ultimately the middle brother, Francisco Pasquel, who took top honors in the $100,000 Longines FEI World Cup™ Jumping Guadalajara.

The early success in the class’s order, with time seeming to be of no issue, may have lulled the following riders into feeling a false sense of security in the ease of the course as the rails began to drop, most notably at the triple and double combinations. There was no shortage of 4-fault rounds with 11 horse-and-rider pairs crossing the timers with a single rail down. Only three other riders joined Maron Kahwagi for the jump off: Francisco Pasquel (MEX), Patricio Pasquel (MEX), and Antonio Chedraui Eguia (MEX).

“When I first walked the course, it walked normal,” said Francisco. “It was technical enough but it wasn’t too big. It was a nice course, and I thought there would be between eight and ten clears, but unlucky rails fell all over. I think Olaf did an amazing job. Time and rails all over are signs of a super course because it shows riders aren’t crashing in just one place.”

The shortened track utilised eight obstacles with nine jumping attempts with space for long gallops and large, looping turns. The first rider in the ring, Maron Kahwagi, piloted the 12-year-old gelding Brave Liberty San Gabriel to a conservative, 8-fault performance, leaving the door wide open for the three other riders.

Next in the ring was Francisco Pasquel, who guided 10-year-old gelding Naranjo over the first few fences at efficient angles to shave time off the clock. But when he noticed that his horse was shifting right, a habit that suddenly developed when competing at the Spruce Meadows Masters in 2016, he eased up on the speed to make sure they crossed the timers clear and in good form.

“Going clear as fast as I could was my strategy,” Francisco said. “My horse was a little nervous and shifted a little to the right so I didn’t push him. I knew my brother was going to catch me on the time but lucky for me, he had a rail. I had a nice time and a little bit of luck.”

In an effort to best his younger brother, Patricio Pasquel, riding his homebred, 10-year-old gelding Babel, attempted to take a stride out of a bending line from the double to a careful vertical, which resulted in riding through the fence rather than over it. Regardless of the misjudged jump, Patricio managed to shave over six-tenths of a second off of his brother’s time.

“In the first round, from the double to the vertical, I did the eight so my coach said now we can try the seven,” said Patricio. “I landed a little left and went for the seven but I was half a meter off. Still, I’m so happy. My horse jumped so well and he was the fastest. I could have gone a little easier and still had the time, but we were excited.”

The final rider in the order, Chedraui Eguia rode 11-year-old gelding Ninloubet at a more conservative pace, which, combined with a rail, landed them in the third-place position.

“My brothers and I talk a lot about strategy and the sport,” said Francisco. “We share but not a lot of time do we agree. Gerardo’s and my horse are a little smaller and Patricio’s has a bigger stride so I try not to know what Patricio is going to do.”

“We always help each other, walk courses together, but each has his own opinions,” added Patricio. “For example, Francisco did eight strides to the triple today, and I did seven. We all know our horses and our horses are different. But this is a dream come true for the whole family – just to be here with my brothers and to spend so much time with them enjoying this sport.”

Olaf Petersen, Jr. (Course Designer): “I think we had to take into consideration that it was the first grand prix in Mexico this year. And the horses were coming from a break. It was big enough but I think, in my point of view, frankly, a nice start. And we had faults here and there and a lot of riders with only one fault. I think more than half of the class was zero and four faults. If it’s like that I’m really, always, very happy. As a course designer, you also need luck. I wouldn’t change anything today. And I had the luck on my side today.”

Francisco Pasquel (1st): “I was a little bit lucky. The horse jumped amazing the first round. I got a little bit nervous in the jump off. He had to carry me on. In the end, you need luck to win. It was a really technical course with a lot of questions and really good job from Olaf.

“The horse is 10 years old. I’ve had him for a year and a half. My plan is not to go to the Final because he’s a green horse. I did a mistake last year taking him to the Masters. So it was too big for him as a 9 year old. My goal is in the next year to take him to the World Championships in Tryon. I want to take him slow in the summer to Spruce. We have many, many good shows [in Mexico]. I think for me, my favorite is Jalapa. I think the footings is the best not only in Mexico but in the world. We have plenty of shows before Spruce to be in the best shape. That’s my plan for the moment.”

Patricio Pasquel (2nd): “I’m so glad Francisco won. He did a great job. Going before all of us, he did a fast enough round without going crazy. I put a little of emotion into the class. We’re happy that Franc won and I want to congratulate Olaf because he did a great job today.”

Antonio Chedraui Eguia (3rd): “I think the Longines triple combination was a little bit downhill and coming from a vertical you really had to decide what you were going to do from the triple bar all the way to the line. It was a long line downhill and got a little complicated but I think it was fair and the results show that Olaf did a very good job.”