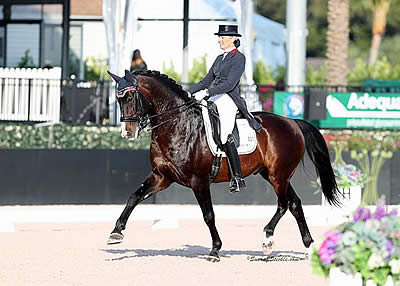 “I don’t think I ever realized that it was this difficult. It’s been such a journey for me for so many years,” said Jorst of her decision to compete at the international level. “I was working and working, and I knew that I needed to do something. I turned 48 and I sold my company, and I set out to do this crazy thing. It is totally my passion.”

Commenting on Nintendo, Jorst said, “My favorite thing about him is his spirit. He just goes and goes. All of those years when I made mistakes, and I didn’t really know what I was doing, he just kept on going and kept trying to figure out what I was trying to ask of him. He still does that all of the time, and he is such a pal in the ring for me.”