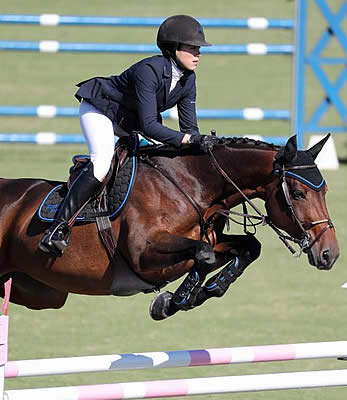 Commenting on Fineman’s ride on the Grass Complex, Goutal said, “It’s a big change for some of the horses because they’ve been in an arena so much and then they switch over to the grass. I didn’t show last week on the grass, and it really is a very unique atmosphere. I think the field and the course jumped and rode very well. For Fineman, there is an added ‘spook’ factor to be out there with the flowers and the grass and everything. I think most riders can agree, when the footing is good, we want to be on the field as much as we can and I think this footing is excellent.”

The gelding belongs to a student of Goutal’s and she has been working with the pair for a few years. She explained, “His owner is studying abroad in Rome, so I am campaigning him a bit while she’s away. I rode him at the Hampton Classic, and now here at TIEC. I’ve been keeping him going for her, so I’m trying to do right by everybody and he’s really put in some great rides at this level. The idea is to just get him ready for her return.”

This trip to TIEC is Goutal’s third to the venue and she has been pleased with the facility thus far. She concluded, “We love it. The cabins and restaurants are lovely. It’s convenient for my husband and I because we have a 9-month-old daughter, so this trip is family friendly. We are no strangers to the ESP show scene and we are really excited about this new stop on our horse show list.”

Second place in the $35,000 Horseware® Ireland Jumper Classic CSI 5* was awarded to Beezie Madden (USA) aboard HH Hercules, a 2009 Irish Sport Horse, owned by John Madden Sales, after stopping the timers in 42.961 seconds.

“Today went very well,” commented Madden. “He [HH Hercules] was good. The first round went really well and then in the jump-off I left out a stride in the first line. He’s only eight, so I’m very happy with him.”

Madden continued, “The grass footing is great and it rides like it walks. The horses jump wonderfully off of it and the ground is excellent. This venue is one of the best.”

Of his rides on the grass, Michan exclaimed, “I think it’s a fantastic field, really. The horses jump so good and it’s so nice. You can see after a lot of horses have gone that there’s not one hole in the footing. For me, really, it’s very difficult to find a venue with this kind of grass footing. It’s really, really nice.”

“Twenty-one combinations pressed forward to the jump-off, so I was lucky to go kind of in the last part, so I could see the turns and the times and the strides they were doing. In the end, with so many good riders in this class, you had to go really fast to try to catch them,” concluded Michan.

The third day of competition at Tryon Fall V brought many of the top hunter riders in the country out to contest the $20,000 USHJA International Hunter Derby track in the George H. Morris Arena, designed by Andy Christiansen. A competitive 23 horse and rider combinations completed the first round, while the top twelve pairs returned to test their skills around the handy course. Schuyler Riley of Wellington, FL and Cleopatra’s Smile posted the highest score, ending their afternoon on a 383.

“I thought it was a great course,” stated Riley. “I love doing the derby classes because I always feel that the jumps are a lot more interesting and you have to ride each jump differently based on what you feel underneath you.”

Riley was leading after contesting the first round, but was followed very closely by Hunter Holloway of Topeka, KS, as well as ultimate second-place finisher, Maggie Jayne of Elgin, IL aboard Like I Said, owned by Pony Lane Farm, who finished the day on a 375. Third place went to Tommi Clark of Agoura Hills, CA, riding Stephen Borders Extraordinaire, after earning a final score of 369.

Of her handy round, Riley said, “I was debating whether or not I should go back in and do the high option at jump one, as I was already leading. I knew that most riders had been putting in some good scores, and I have so much faith in my mare because she’s so careful and scopey, that I just decided to go for it and ride it like I was going to win it.”

The mare, imported in April and owned by Wolfstone Stables & Sales Inc., has guided Riley back into the spotlight in major hunter classes around the country.

As an international show jumper and seasoned FEI Nations’ Cup competitor, Riley stressed the importance of quality horses. “Above anything else, what it always gets back to, is it’s always about the horse. That’s what made me fall in love with this sport, whenever you get a horse like this one, it doesn’t matter what ring you’re riding in, you just have to appreciate a really good ride.”

Riley concluded with a compliment of TIEC, where she competes whenever given the opportunity. “For me, Tryon has always been lucky. I love being here. I love the crowd they always get on Saturday night. The footing on the Grass Complex is amazing. I just love it here.”

The day concluded with a strong win for Christina Kelly of Aiken, SC and Eckham Van Het Steentje in the $10,000 Hollow Creek Under 25 Jumper Classic. Emanuel Andrade of Wellington, FL took a sweep of second and third place positions, stopping jump-off timers in 40.378 seconds and two time-faults aboard Bon Jovi, a 2006 Dutch Warmblood gelding (Verdi x Whoopy C) for second place, while Boy IV, a 2007 Oldenburg gelding (Sandro Boy x Samira III), finished in third-place after a securing a time of 72.216 seconds in the first round and accumulating only a single time fault.

Kelly has only been paired with the 2004 Belgian Warmblood gelding (Berlin x Atleta Van ‘T Steent Je) owned by Elm Rock, LLC for a few weeks. “I don’t know this horse very well yet,” she said. “The course actually rode a bit trickier than expected, but he jumped fantastically.”

Kelly rides with Margie Engle, who has been helping her build a partnership with the gelding. Kelly stated, “He’s amazing to ride. I’m hoping I get to keep the ride on him for a while.”

She continued, “I love the way she trains. She’s very forgiving and just amazing. She’s an amazing rider herself and I think you can hang onto the words she says. She knows this horse inside and out, so I’m excited for what’s next!”