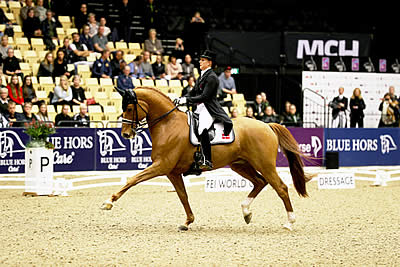 Danish fans had everything to shout about when their home-grown superstar partnership of 25-year-old Cathrine Dufour and her wonderful 14-year-old gelding, Atterupgaards Cassidy, claimed victory at the opening leg of the FEI World Cup™ Dressage 2017/2018 Western European League in Herning (DEN). Although the 14-strong field included Isabell Werth who took triple-gold at the Longines FEI European Championships in Gothenburg, Sweden eight weeks ago, the 48-year-old German rider wasn’t competing her no 1 ride, the great mare Weihegold. So the reigning FEI World Cup™ Dressage champion had to settle for runner-up spot with Don Johnson FRH ahead of Sweden’s Patrik Kittel and Delaunay OLD in third, mirroring exactly the results of the preliminary Grand Prix.

There was a huge sense of achievement for Dufour.

“The last time I competed in a World Cup was two years ago, and we finished second-last. So I wanted to improve on that for sure. Isabell has beaten me the whole season, but yesterday and today my horse was so relaxed and easy. And yes, I did smile during the Freestyle, because if you practice something at home and finally bring it into the ring then you feel really good about it.” — Cathrine Dufour (DEN)

Going sixth of the 14 starters, Sweden’s Tinne Vilhelmson Silfvén and Paridon Magi posted a leading mark of 76.320 but were overtaken by another of Denmark’s rising talents, 23-year-old Anna Zibrandtsen who held the advantage with Arlando at the halfway break when putting 76.945 on the board.

And the standard just kept rising as the last six took their turn, Agnete Kirk Thinggaard, a member of the Danish silver medal winning team in Gothenburg alongside Zibrandtsen, Dufour and Anna Kasprazak, scoring 78.500 with Jojo Az before Werth changed the whole tempo of the competition when posting 83.755.

The sometimes naughty “Johnny”, as Don Johnson is better known, was clearly on top form, throwing a buck before entering the arena and then producing a really fluent Freestyle, full of power and collection. Werth knew she had thrown down the gauntlet to the remaining four left to go, but, second-last into the ring, Dufour didn’t flinch. A high degree of difficulty in the early stages of their floorplan suggested a big score might well be on the way. And so it was, with the loveliest walk included in their beautifully executed test for the massive winning mark of 85.945, all five judges putting the pair in pole position and the crowd rising to their feet in sheer delight.

Swedish showman, Patrik Kittel, gave it his best when last to go, and his mark of 81.095 pinned Denmark’s Daniel Bachmann Andersen and Blue Hors Zack back into fourth spot, but the Danish party had already begun. And now Dufour is having a whole new re-think about her competition programme over the coming months.

“I didn’t plan to do the World Cup season, but of course I’m getting a bit hungry after this.” — Cathrine Dufour (DEN)

Dufour also earned Grand Prix Special and Freestyle bronze at this summer’s Europeans. She wants to do her best by the wonderful Cassidy, however, who has been her loyal partner since she was competing at Junior level.

“I didn’t train with him since Gothenburg until the last few days before coming here to Herning. My end goal is always to take care of him, so I better go home and make a plan and discuss things with my coach. We will see….” — Cathrine Dufour (DEN)

Herning certainly provided a great start to the new season, and Ground Jury President, Denmark’s Susanne Baarup, couldn’t hold back her emotion about a day of fantastic sport. It wasn’t just the home win that brought tears to her eyes.

“When it came down to the last five riders I almost had to take some tissues out. It was really an honour to judge such good riders, and Cathrine’s win was well deserved. This has been a fantastic show for her.” — Susanne Baarup (Ground Jury President)

Jens Traberg, Show Director Dressage at Herning: “This was the first time to have this World Cup qualifier in Herning – we have wanted to bring it here for a long time.”

Patrik Kittel SWE (3rd): “The audience here in Herning was really amazing; they were really supportive of everyone, not just the Danish competitors. It’s important to make the audience part of the competition – I have no problem if they start clapping before the end of the test because it makes the competition more fun and they are getting involved.”