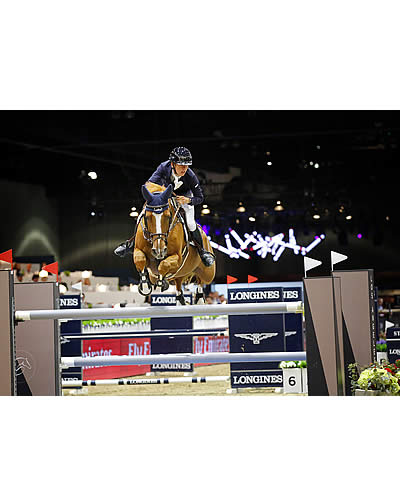 Los Angeles, CA. October 2, 2015 – Action at the second day at the Longines Masters of Los Angeles culminated with Friday night’s Longines Speed Challenge. Bertram Allen and Quiet Easy 4 raced against the clock with a remarkable time of 58.91 seconds. Scott Brash and Piergiorgio Bucci rounded out the podium, Brash with a time of 58.96 seconds on Hello Annie and Piergiorgio Bucci and Cuarta with a time of 62.94 seconds.

The energy was palpable as the microphoned jumps enhanced the sounds of the ring. Every spectator felt the electricity emanating between horse and rider as they raced around the course. 2014 Longines Masters of Los Angeles Longines Speed Challenge winner Jane Richard Philips returned in an attempt to reestablish her dominance but couldn’t keep pace with the 20-year-old Irish phenom.

The only speed competition of its kind in the world, the Longines Speed Challenge with $130,000 in prize money is a staple of all three Longines Masters events, in Paris, Hong Kong, and Los Angeles. The emotion and suspense were palpable as top-ranked international show jumpers raced through a course designed by renowned Belgian designer Luc Musette. With the launch of the Longines Masters series, the Longines Speed Challenge introduces the new 1.45m course design that will be carried to the Paris and Hong Kong events, challenging the riders to improve their time at each leg.

The Longines Speed Challenge format created by EEM emphasizes speed by and precision, as each fault is penalized by 2 seconds instead of the standard 4. A fallen rail needn’t be cripping, therefore, and riders can still hope to make up these two penalty seconds by going just a little bit faster.

“Scott Brash’s round was unbelievable,” said Allen in reaction to watching the World Number 1’s pace-setting round. “My horse really tried.”

John Whitaker rode to victory on Argento in the Prix Airbus, the day’s first 5* level competition. He beat Edwina Tops-Alexander and Lintea Tequila by a mere 0.59 seconds in the jump-off. The win adds to his recent success in the series as the winner of the Gucci Gold Cup and Longines Grand Prix at the Longines Masters of Hong Kong. Whitaker and Argento are in great form and heating up in time to compete in Sunday’s Longines Grand Prix in hopes of winning the second leg of the Masters Grand Slam Super Bonus of €500,000.

“With the way he [Argento] jumped today, I should give him the day off. He’s a fighter; he’s tough. He wants to do the job, and that’s 95 percent of the battle. You know he’s going to jump the jumps,” said Whitaker.

The world’s best international show jumpers will continue to compete at the Los Angeles Convention Center throughout the weekend. To witness the champion caliber riding and enjoy the Kids Village, one-of-a-kind art pieces from Opera Gallery and more, purchase your tickets at http://www.mastersgrandslam.com/en/ticketing.